Our most popular articles of the year cover topics ranging from lapsed vegetarians/vegans, the links between animal cruelty and human abuse, and causes of dog aggression.
EXCLUSIVE Exclusive article or blog for Faunalytics.
Author: karol orzechowski | Published: December 30, 2015
Photo by Jo-Anne McArthur / We Animals

We post new articles to our Research Library on a daily basis and it’s fascinating for our team to see how some items pick up traction and gain popularity. Using web analytics and observing how content gets shared on social media or covered in the news, we do our best to understand why some information goes viral. This year, our most popular and discussion-sparking stories covered a mix of topics ranging from what makes people stray from (and stay with) being vegetarian/vegan, the links between animal cruelty and human abuse, the impact of meat consumption on the environment, the causes of dog aggression, and effective ways to help free-roaming cats.

1) How Many Former Vegetarians and Vegans Are There? / Study of Current and Former Vegetarians and Vegans – Our most popular article of the year was actually a blog post summarizing our own expansive study of current and former vegans and vegetarians. Faunalytics’ Executive Director Che Green delved into the data and identified key statistics and trends, including ideas for how to keep so many new veg*ns from relapsing. The study caused a great deal of discussion among animal advocates and outsiders alike!

2) Understanding Animal Cruelty: The Dark Triad – Our second most popular article of the year looked at a psychological study that links a group of three traits known as the “Dark Triad” (narcissism, Machiavellianism, and psychopathy) with animal cruelty. Perhaps not surprisingly, the study found that “those who reported acts of cruelty tended towards a higher rating of psychopathy.” The article emphasized, however, that the topic remains mostly unexplored and that more research into these links could be beneficial.

3) Battering, Bullying, and Beyond: The Role of Gender, Power, and Control in the Link between Animal Abuse and Human Violence – Similar to #2, this article, a guest blog from Clif Flynn, PhD, looked at a study into the links between human and animal cruelty. The research found that males who abuse animals and bully other children, batter women, or engage in serious violence against other humans as adults, “appear to be rewarded by the power they have over other beings,” and surmised that those who have been bullied “may want to transform the powerlessness they feel as victims by victimizing others — both human and animal.” 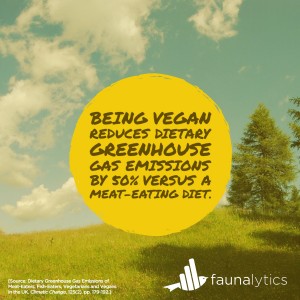 4) Meat Eaters Produce Double the Greenhouse Gases as Vegans – This perhaps cheekily named article added a small (though unintentional) chuckle to a very serious issue. This wide-ranging analysis found that people who were vegetarian or pescetarian had diets that produced similar amounts of Greenhouse gases – about a third less than meat-eaters. However, the study also noted that being vegan reduced dietary GHG emissions even more, with vegans producing about half of the GHGs as average meat-eaters.

5) Bullies, Victims, and Animal Abusers: Do they Exhibit Similar Behavioral Difficulties? – Following the trend and the increasing interest in bullying as a topic, this article looked at a study that wanted to identify patterns of behavioral problems associated with a history of animal abuse, bullying, and/or victimization. The survey found that people who fit into those three categories tended to have “significantly more behavioural challenges” than those that didn’t.

6) Animal Protection and The Pace of Social Change – Another blog post by our Executive Director, this article attempted to strike a balance between optimism and realism, taking an honest look at where the animal protection movement is and where it’s headed. “I think within the next 5-15 years we’ll witness multiple ‘trigger events’ that will shift public attitudes in favor of pro-animal alternatives. And that’s one of the first major steps on the path toward something closer to real animal liberation.”

7) Would You Eat Tofu At The Zoo? – An interesting – if mostly theoretical – article about the ethical inconsistencies of zoos charged with looking after the welfare of their captive animals while also serving animals as meals to visitors. Though the authors recommended that zoos work with “knowledgeable non-profits to change their food sales and feed practices,” some of the responses to this article questioned the basic premise: if zoos care about the welfare of animals, why are they supporting captivity in the first place? 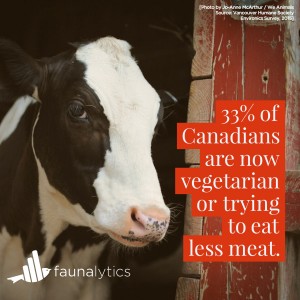 9) 33% of Canadians Now Vegetarian or Trying To Eat Less Meat – This article was based on a survey by the Vancouver Humane Society and the polling company Environics, which found that “33 percent, or almost 12 million Canadians, are either already vegetarian or are eating less meat.” Delving further into the numbers, the study indicated that 8% of respondents were already vegetarian or “mostly veg” and that 25% of Canadians say they are trying to eat less meat.

10) A New Method of Feral Cat Control Now Outperforms TNR – This article looked at a computer-modeled study that contrasted Trap-Neuter-Return (TNR) with Trap-Vasectomy-Hysterectomy-Return (TVHR), and found that the TVHR method was “clearly superior.” Why? The researchers found it especially promising because “it allows cats to retain reproductive hormones and normal social behavior, while controlling populations.” The research is purely theoretical, and not everyone agreed with the conclusions.

If you appreciate the mix of interesting articles, you can be the first to find out about our latest articles each week by signing up for our weekly email alerts.