Animal Protection and the Pace of Social Change

How quickly do social movements reach a "tipping point" and will the animal protection cause follow suit? We discuss some interesting research from Bloomberg News to shed a little light on the topic.
EXCLUSIVE Exclusive article or blog for Faunalytics.
Author: Che Green | Published: October 6, 2015
Chart by Bloomberg Business

An interesting chart from Bloomberg News shows “how fast America changes its mind” by tracking six different social issues: interracial marriage; prohibition; women’s suffrage; abortion; same-sex marriage; and recreational marijuana. All show a dramatic increase in social acceptance, though some took a long time to get to that point (interracial marriage and prohibition) while others happened relatively quickly (abortion and same-sex marriage).

Though seemingly unrelated, animal advocates can be energized by these results. While our movement faces unique challenges, the Bloomberg article shows that some social movements can reach a “tipping point.” Ever since Malcolm Gladwell wrote about the tipping point concept in 2000 (incidentally, the year we founded Faunalytics), animal advocates have wistfully sought a tipping point in society’s attitudes and behavior toward animals. For the first time in a long time, it now seems achievable.

So are we on the precipice of a major shift in animal-related behavior? Yes and no.

There are a lot of reasons for optimism. The recent outrage over the killing of Cecil the lion is one example of how some nonhuman animals are revered by human society. The success of Blackfish is another. In many areas, the number of companion animals being euthanized has stabilized (at least for dogs). And while the number of vegans may not be growing dramatically, there are so many part-time vegans/vegetarians and meat reducers that the farmed animal industry is on edge. And those part-timers may be responsible for 400 million fewer farm animals being killed in the U.S. in 2014.

There’s even more reason to have a sense of hope for improving animal protection. As the Faunalytics Animal Tracker shows, 7 in 10 adults in the U.S. have a favorable impression of animal advocates. We (advocates) also rank highly when it comes to credibility, and people feel strongly about protecting animals across a wide range of issues. Nonhuman animal sentience is being taken increasingly seriously by philosophers, technologists, scientists, policymakers, and the general public. Change is undoubtedly in the air, but we should still be cautious with our optimism…

The Bloomberg chart above only reflects human-oriented “causes.” Progress is likely to be much slower for the overall animal protection movement (but with rapid gains for specific issues). Most people readily identify with – and care more about – other people than they do nonhuman animals. And causes focused on victims that people can identify with are generally more successful. So I think animal advocates have a relatively difficult challenge when compared with many other social justice issues.

And let’s be honest: things are going to get worse for nonhuman animals before they get better. The major drivers of this are the increase in animal consumption among “developing” countries and devastation of the environment and wildlife populations caused by humans. Most people in nations such as China, India, and Brazil will increase their consumption of animals until they reach a plateau like we’re seeing in most “developed” countries, but we hope it will peak at a much lower level. Wildlife decimation will also eventually plateau, but only because there is less room for “growth” – humans can only destroy so much wildlife, but we can always breed and slaughter more chickens.

What’s an animal advocate to do? My colleague Kim Stallwood once wrote, “Animal rights has the potential to move to the mainstream from society’s margins. But this can be only achieved if the animal rights movement responds to two important points. First, to understand how social movements advance their mission from obscurity to acceptance. Second, to learn how to implement a strategy that balances the utopian vision of vegan idealism with the pragmatic politics of achieving the possible.” Wonderfully articulated, but hard to accomplish.

I believe a combination of natural social change (evolving human ethics), animal advocacy (outreach and persuasion), and scientific advancements (e.g., cellular agriculture) will eventually get us close to something like animal liberation. But for the foreseeable future, by which I mean many generations, there are going to be pockets of animal abuse. For instance, there is likely to be at least a small market for animal flesh, and not the cultured kind. There’s always going to be some jerk who kicks his dog for barking loudly, some child who burns an ant with a magnifying lens.

To be honest, I don’t really think that a true sense of “animal liberation” is achievable for as long as humans and nonhuman animals coexist. But we’re stuck with that dynamic, and I do think that we humans can achieve a lot by marginalizing animal cruelty to the point where we’ve nearly eliminated it. And I believe we’re making a lot of progress in many areas of animal protection, while overall still having a long way to go. Get comfortable with your advocacy, because animal protection is a long-term social justice issue.

For a bit of context, here is how Bill Moyers describes a theoretical model showing eight stages of a successful social movement. The Movement Action Plan was first published in 1986 and provides a possible strategic framework for social movement organizers. The red arrow is my own addition. I think within the next 5-15 years we’ll witness multiple “trigger events” that will shift public attitudes in favor of pro-animal alternatives. And that’s one of the first major steps on the path toward something closer to real animal liberation. 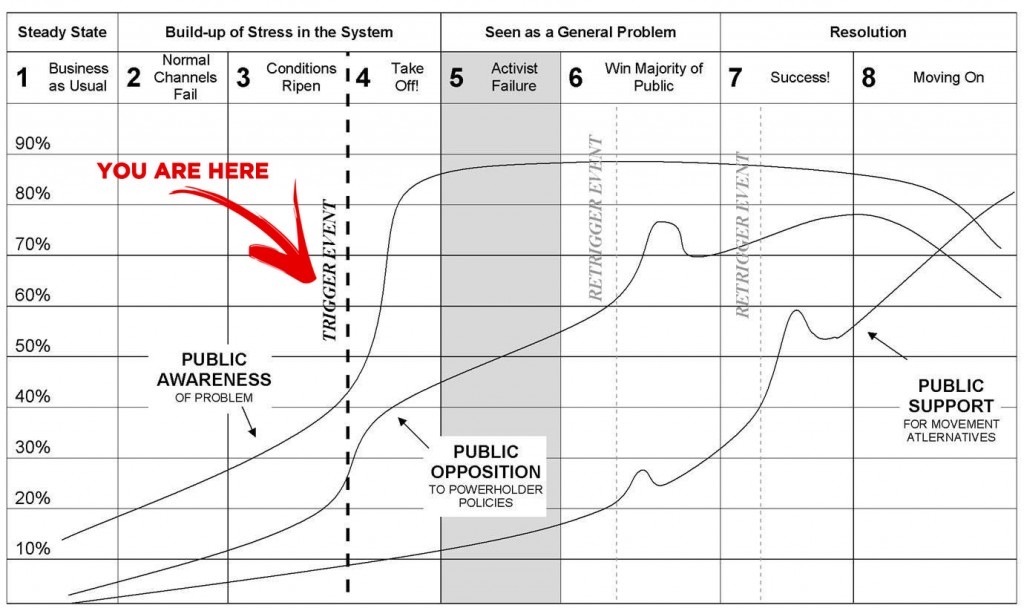