A "realistic" worldwide shift away from meat consumption would mean a "food gap" reduction of 20%, according to this study.
FULL TEXT The full text of this article is available.
PEER REVIEWED This article has been peer reviewed.
Summary By: Faunalytics | This is a summary of an external study | Published: May 26, 2016
Photo by Flickr user dumbonyc 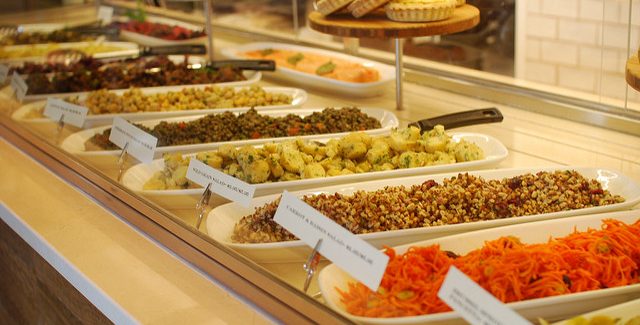 As we push further into the 21st century and the world’s human population increases, there is more talk about an impending “food gap” – the difference between “crop calories available” and the “expected calorie demand.” By current estimates, the global food gap will be 70% by 2050, driven primarily by population growth and shifting diets. As the global population continues to consolidate in cities and become wealthier, people are tending to eat more resource-intensive foods such as meat and dairy (the “global middle class” is expected to number about 3 billion people by 2030). Food systems are undergoing rapid technological changes, but the food gap looms nonetheless. The advances generally lead to large, multinational businesses “increasingly influencing what is grown and what people eat.” This convergence of trends and market forces suggests that we are heading toward a food landscape dominated by “Western-style diets, which are high in calories, protein, and animal-based foods.”

This study by the World Resources Institute (WRI) begins by acknowledging that simply increasing food production is not humanity’s best or only option. We must also be cognizant of the pressure that we exert on natural ecosystems due to agricultural activity. Any long-term food gap solutions need to address both production and consumption; in this report, the authors examined “shifting the diets of populations who consume high amounts of calories, protein, and animal-based foods.” Specifically, the authors looked at the three ways the diet can be shifted: first, by reducing overconsumption of calories; second, by reducing overconsumption of protein and limiting consumption of “animal-based foods”; and third, specifically reducing the consumption of cows (“beef”), which is one of the most ecologically inefficient foods that people consume.

To help accomplish these changes, the WRI proposes a new framework that is “based on proven private sector marketing tactics” known as the “Shift Wheel.” They note that the development of the Shift Wheel has been informed by shifts in consumption that were already “successfully orchestrated” in different parts of the world, such as the shift “from caged to free-range eggs in the United Kingdom, from higher-to-lower-alcohol beer in the United Kingdom, and away from shark fins in China.” According to the authors, this is accomplished through four complimentary strategies:

The report is extensive and it will be worth the time for many advocates to read the full version available from the WRI website. For farmed animal advocates, the “Shift Wheel” concept and its related strategies may not only help address the forthcoming food gap but may also help speed up the shift away from animal products and toward plant-based diets. It’s clear that something needs to change because global agriculture in 2050, as described by this report, will continue to slaughter animals by the billions while falling far short of adequately feeding the human population.