Faunalytics’ original study of clean meat acceptance included a measure of how much consumers would pay. This analysis provides more detail about those amounts.
FULL TEXT The full text of this article is available.
EXCLUSIVE Exclusive article or blog for Faunalytics.
Author: Jo Anderson | Published: August 22, 2018

Faunalytics recently completed a study about consumer acceptance of clean meat. One of the measures in the study was a scenario asking consumers to imagine a choice between clean and conventional meat. They were then asked how much they would be willing to pay for clean meat. This analysis provides details about those amounts.

These results likely overstate willingness to pay for clean meat somewhat. First, because the study included positive messages that would not appear at the point of sale. Also, people claim that they are willing to pay more in response to survey questions than they are when actually spending their money. Despite these limitations, Faunalytics believes the results are encouraging for clean meat producers, marketers and investors.

First, the scenario* used in the study is shown below. 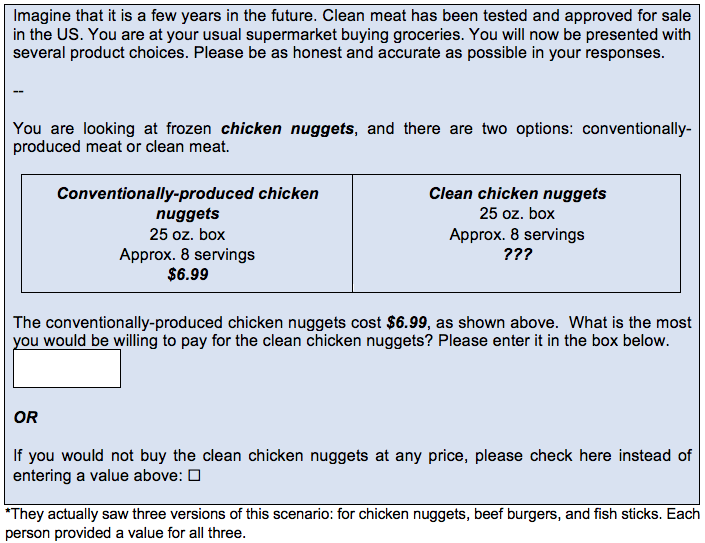 However, we know that advocates and manufacturers of clean meat would like a better idea of the actual amounts people will be willing to pay when it becomes commercially available.

Because of the keen interest in this information and the lack of available data, we have undertaken this analysis, calculating the amounts that study participants provided as a percentage of the equivalent conventional meat product.

Please note that there are some very important caveats that limit how much weight should be given to the results. These are described first, and we strongly encourage readers to consider them seriously.

The purpose of the study was to test the effectiveness of positive messaging about clean meat, and the scenarios directly followed that messaging. In real life, people shopping for meat will not have read positive messages immediately before making a purchase, so these estimates are probably a little high.

The estimates are likely high for another reason as well. Because this is a hypothetical scenario asking participants to imagine what they would pay, it is likely affected by hypothetical bias. This is a common phenomenon in which consumers tend to overestimate how much they would pay for a product if they don’t actually have to pay for it in the study. In short, when people in a study try to imagine spending money, they aren’t that good at it. Spending real money “hurts” more than imagining it so we tend to overestimate what we’re willing to pay for things.

Considering these two limitations (the scenarios directly following positive messages and the influence of hypothetical bias), the percentages presented below should probably be interpreted as the highest possible values that might be observed in real life—they are likely to be inflated.

What Will People Pay?

Table 1 presents proportions for all participants in the study. 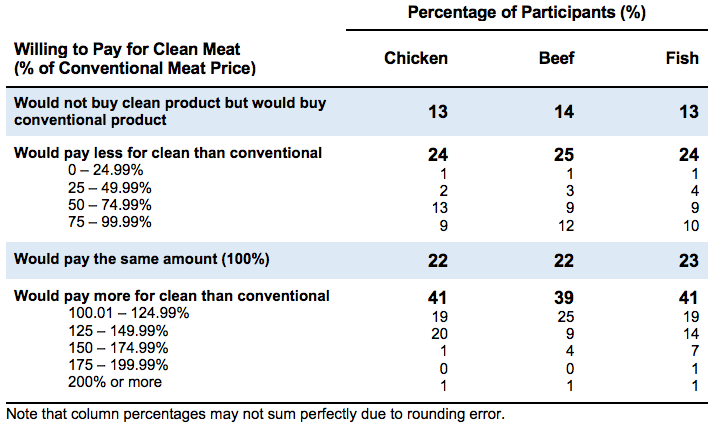 A few things are worth noting in Table 1. First, as noted in the full report, about 40% of participants said they would pay more for clean meat than for conventional meat when choosing between them. Most of those would pay in the range of 101-150% of the price of conventional meat, although the specifics differ a little by type of meat (chicken, beef, or fish).

Almost another quarter of participants wouldn’t mind paying the same amount for clean meat as they would for conventional meat.

Overall, despite the limitations described above, these results are encouraging for clean meat producers and marketers.

Does the type of message affect what people will pay?

As described in the full report, participants saw one of four positive messages about clean meat. Participants who read a message arguing that conventional meat is unnatural were willing to pay more for clean meat relative to participants who read a general message describing clean meat’s benefits. This indicates that the ‘conventional meat is unnatural’ message increased what consumers were willing to pay. Table 2 shows these two messages. For the other two messages (which were unsuccessful) see the full report.

Table 3 presents proportions for the two groups of participants who read those messages: ‘conventional meat is unnatural’ and the control message. This simply allows the difference to be seen in more detail. 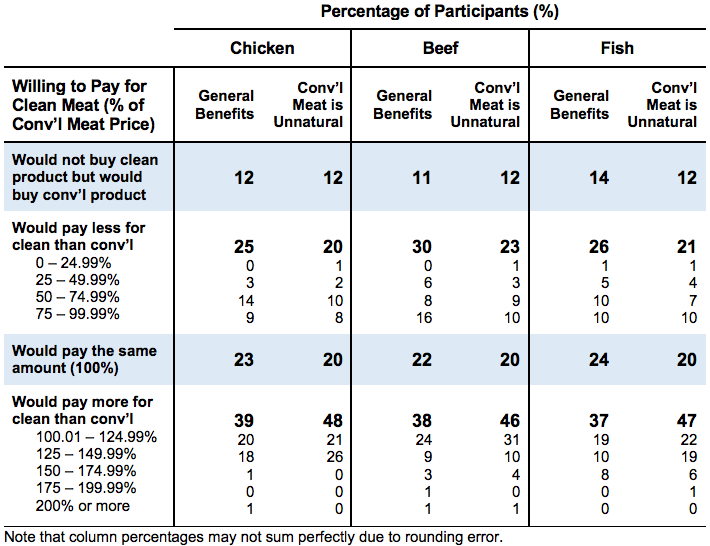 The results of these analyses should encourage people invested in the future of clean meat.

It is unlikely that clean meat will be cost-competitive with conventional products when it first appears in restaurants or grocery stores. However, these estimates suggest that a fairly large proportion of people would consider buying it even if it costs more. This willingness to pay more may be particularly strong if the downsides of conventional meat are on their minds (Table 2).

There are other factors that may shift the public’s willingness to pay for clean meat between now and when it becomes available, in either direction. Negative publicity by opponents may lower it or positive publicity (like the messages used in this study) may raise it.

High prices at launch are not necessarily bad, even if they are at the upper end of the range shown here. High prices can make a product appear more valuable, creating associations with luxury and rarity. If those ideals are marketed effectively, high prices could work to clean meat’s benefit, at least to raise interest.

Once clean meat becomes more widely available—in grocery stores, as in this study scenario—this range of estimates may provide a better sense of what people are willing to pay when reaching for their next meal.

Author: Jo Anderson
Jo Anderson is an advocate for animals and empirical research. She has many years of experience with a wide range of social science research methods and topics, as well as advanced training in statistical analysis. Jo became Faunalytics' Research Director in 2017 and since then has led and supervised studies of attitudes and behavior pertaining to animals and veganism, advocate retention, donation decision-making, and many other topics. Jo has a PhD in social psychology from the University of Waterloo and completed a two-year postdoctoral fellowship at Cornell University. Jo's spare-time interests include sewing, reading, finding accidentally-vegan junk food, doting over cats, and being generally indoorsy.