Giving restaurant-goers menus where veg items are the default items on the menu can significantly increase consumption of meat-free food.
FULL TEXT The full text of this article is available.
PEER REVIEWED This article has been peer reviewed.
EXTERNAL STUDY This is a summary of an external study.
Summary By: Laura Thomas-Walters | Published: July 17, 2018
Photo by Alexandra Andersson on Unsplash

People are more likely to eat a healthy meal when salad bars are placed prominently in a cafeteria. Researchers have now found that when people are given a default menu that contains only meat-free meals they will be more likely to eat vegetarian, even if there are also non-vegetarian options available. Presenting appealing meat-free meals also helps!

Nudges are a behaviour change technique from the field of behavioral economics, which try to influence behaviour by exploiting common flaws in decision-making. Humans do not fit the standard (optimally rational model) of economics and often rely on heuristics (rules of thumb) to make decisions. Nudging seeks to take advantage of these biases, such as by providing socially-desirable choices as the default option (e.g., automatic enrolment for workplace pensions or organ donation). Defaults are simply the options that we are automatically given if we don’t explicitly specify otherwise. People tend to favor choosing the status quo over non-default options.

Researchers wanted to see whether people would choose more meat-free meals if they were given a vegetarian menu by default. They used a 2x2x2 study design (Fig. 1, reproduced from original study) so that they could also compare how varying the appeal of the meat-free meals, as well as if providing information about the impact of meat on the environment, would affect food choices. “Appeal” of the meat-free meals was ranked by 26 undergraduate students prior to the start of the study.

320 undergraduate students were approached in the dining hall of a US university campus and agreed to take part in the study in exchange for $20. They were each given a menu and asked to pick a meal for lunch or dinner. The default menu had 5 meat-free meals on it. If they received the default menu, they were told they could look at a second menu on the wall (placed around 3.5m away) for other options. The control menu had a mixture of meat-free and nonvegetarian options. Menus in the “information” treatments highlighted meat-free meals with a leaf symbol, and had this text at the bottom of the page:

This symbol on the menu identifies a meat-free meal option. Recent scientific studies have suggested that consuming less meat can help to reduce our environmental impact.

After they chose their meal, all the students filled out the same questionnaire about their age, gender, current diet (e.g. vegetarian/vegan), environmental values, and worldview.

The participants had an equal gender mix, but few were vegetarian (2.8%) or vegan (0.3%). Receiving a default menu increased the percentage of people choosing meat-free meals, even when they were unappealing (Fig. 2, reproduced from original study). This could be because of the convenience or an implied endorsement from the restaurant manager. Surprisingly, neither the provision of information about the environmental impacts of meat or the values of the participants influenced meat-free meal choices. The appeal of the choices did increase the number of participants choosing meat-free meals though. 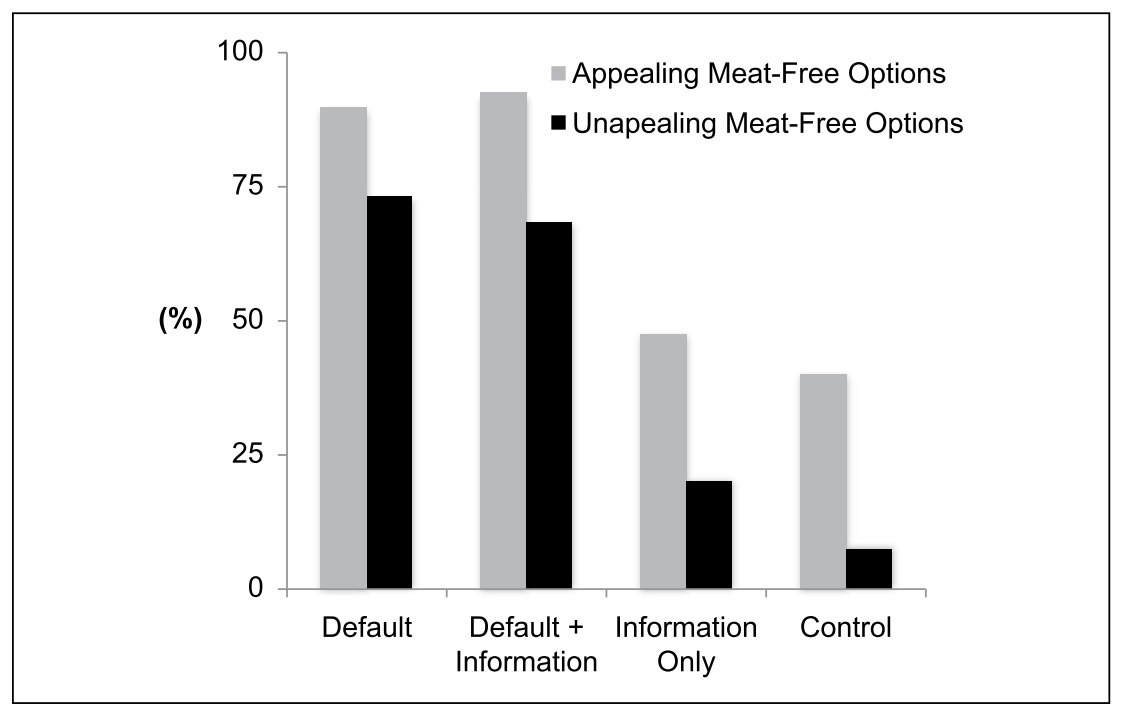 Institutions like schools or businesses may be unwilling to restrict the options of their customers by refusing to serve meat. As animal advocates, we could try providing a vegetarian menu that people automatically receive to increase the number of meat-free meals chosen in these settings. Just make sure that people find the vegetarian options appealing!

It’s all about taste, price, and safety. Researchers take stock of the knowledge about consumers’ acceptance of clean meat.