Eating meat is in many ways a process of dissociation on the part of the meat eater. A new study looks at why and how this phenomenon occurs.
ABSTRACT ONLY Only an abstract of this article is available.
PEER REVIEWED This article has been peer reviewed.
Summary By: Faunalytics | This is a summary of an external study | Published: December 6, 2016
Photo by Flickr user blokeonabike 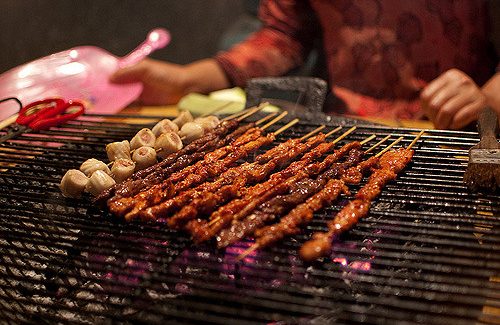 Most people do not like causing pain to animals, yet many purchase and consume meat, a process that causes immense suffering and ultimately death to animals. In order to overcome this contradiction, often called the meat paradox, people may dissociate meat from animals by ignoring or suppressing the knowledge that the meat on their plates originated from a once-living creature. This paper, published in Appetite, reports on the first comprehensive empirical test of dissociation related to meat consumption.

The authors carried out six experiments designed to mirror real-life situations that consumers might encounter when purchasing and eating meat. In the first study, participants responded to questions designed to gauge their empathy and level of dissociation with one of three images of a cooked chicken. One image showed minced chicken meat (high processed condition), another showed the meat cut into parts (medium processed condition), and the final image displayed the whole chicken carcass (low processed condition). Participants who viewed the image of highly processed meat demonstrated less empathy and increased dissociation than participants who viewed images of medium and low processed meat. The authors conclude that people can more easily dissociate highly processed meat products from the source animal.

In the second study, participants were shown pictures of a pork roast either with or without its head. They also responded to questions designed to gauge their level of dissociation between the meat item and the animal source, their willingness to eat the pork, their willingness to eat an alternative vegetarian dish, and their level of disgust for the image. Results from the two-part experiment showed that participants who saw the beheaded pork roast felt less empathy, expressed less disgust, were more willing to eat the meat, and were slightly less likely to choose a vegetarian alternative. The authors speculate that Western supermarkets are likely aware that head parts elicit disgust and empathy and, therefore, purposely sell whole-animal meat products with the head removed.

In the third study, the authors measured participants’ general tendencies to disassociate meat from animals. Participants were also shown an advertisement for lamb chops that either contained or did not contain a picture of a living lamb. They, too, responded to questions similar to those included in the first and second studies. Results showed that participants who saw the image with the lamb were less likely to dissociate the live animal from the lamb chop, showed more empathy, and were less willing to eat the meat. Additionally, the authors found that differences were more pronounced for participants who had medium to high tendencies to dissociate meat from animals in general. They note that the latter result was expected, as people who report high dissociation in general struggle to reconcile their dietary choices with their concern for animal pain and suffering.

The fourth and fifth studies investigated how the language used to describe meat may bolster dissociation. In the fourth study, participants responded to one of three texts stating that cows were “harvested,” “slaughtered,” or “killed.” Results showed that the term “harvested” elicited the greatest levels of dissociation and indirectly led to less empathy. In the fifth study, participants responded to a menu that used either the terms “beef” and “pork” or “cow” and “pig.” Results showed that participants who saw the menu with labels “cow” and “pig” showed less dissociation, more empathy and disgust, less willingness to eat the meat dishes on the menu, and a marginally increased likelihood of choosing a vegetarian alternative. Once again, effects were significantly more pronounced for participants who had medium to high tendencies to dissociate meat from animals in general.

The authors conclude that the series of studies “experimentally demonstrated what many philosophers and animal rights advocates have claimed for long times: Culturally entrenched processes of dissociation found in the way we produce, prepare and talk about meat and animals sustain people’s willingness to eat meat as they make it easy to ignore the meat-animal link. Such dissociation reduces empathy and disgust that would otherwise reduce meat consumption.”

As the authors note, advocates have long been aware of the tactics used by stakeholders in the meat industry to disconnect meat from animals. Advocates themselves often employ tactics that have the opposite effect by forcing people to confront the link between living animals and the meat they eat. Therefore, while the findings from this study may not come as a surprise for advocates, they provide useful evidence showing how images and language can directly increase or decrease dissociation, trigger empathy and disgust, and impact people’s willingness to eat meat. Additionally, the study reinforces the idea that advocates can more easily persuade people who already struggle with dissociating meat from animals to choose veg*n diets.