Calculating The Costs Of CAFOs

From government subsidies to environmental devastation, Confined Animal Feeding Operations (factory farms) have huge costs.
FULL TEXT The full text of this article is available.
Summary By: Faunalytics | This is a summary of an external study | Published: April 26, 2016
Photo by Flickr user elisebauer 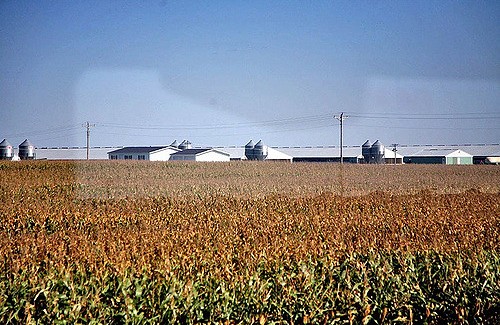 There is no doubt that animal agriculture is woven into the very fabric of the economy of the United States. Prior to the advent of Confined Animal Feeding Operations (CAFOs), animal production was usually integrated into the cycle of crop production in a way that balanced the inputs and outputs of the process. It was a method farmers had used for centuries. While the old system may not have adhered to an ethic of animal rights, the welfare of animals was arguably higher in those less intensive systems. The spread of CAFOs and their current dominance over agriculture imposes staggering ethical costs on animals; it also negatively impacts at-risk communities and taxpayers in the U.S.

CAFOs Uncovered, a publication by the Union of Concerned Scientists, examines the “hidden” costs of intensive agriculture – including direct costs such as subsidies to various industries, indirect costs such as how crop subsidies “prop up” CAFOs, and tertiary costs like from the pollution caused by the massive amounts of manure that CAFOs generate. Even further down the chain, CAFOs benefit from subsidized cleanup programs that aim to fix some of the problems that CAFOs cause, without asking animal agriculture to foot the bill.

The report goes on to describe the scale of the problem. Although CAFOs only comprise “about 5% of all U.S. animal operations… they now produce more than 50% of our food animals.” The manure produced by CAFOs comprises 65% of all manure from U.S. animal operations, to the tune of about 300 million tons per year, which is “more than double the amount generated by this country’s entire human population.” And yet, the report notes, this scale of operation does not necessarily result in a more “efficient” operation, which is usually considered the primary benefit of CAFOs.

So if these concentrated farms aren’t more efficient, how are they thriving? The answer, according to this report, lies “largely in farm policies that have favored large operations.” For example, animal feed accounts for about 60% of the costs of raising pigs and chickens and is also an important cost for raising dairy and beef cows. Federal policies have “encouraged the production of inexpensive grain that benefits CAFOs,” to the extent of about $4 billion per year from 1996-2005. In other words, the playing field is far from level and is tilted clearly in favour of perpetuating the CAFO system.

It isn’t possible to fully summarize the document here. Instead, we encourage animal advocates who are interested in these hidden costs of meat to check out the full report. Though it was originally published in 2008, and thus is not “hot off the presses,” much of the information is just as relevant as ever, if not more so.

As far as advocacy goes, the arguments about the economics of CAFOs can be a very useful tool, especially when it comes to speaking with consumers who do not prioritize animal welfare above economic concerns. For those consumers not swayed by ethical arguments or appeals to emotion, it is important to remind them that cheap meat is not actually cheap. There are many costs that are hidden and a growing number of scientists agree that those hidden cost are going to catch up to us sooner rather than later.