Veganism is increasingly being promoted by larger organizations, but those encouraging veganism may have to rely on more grassroots forms of organization.
EXCLUSIVE Exclusive article or blog for Faunalytics.
Author: Nick Pendergrast | Published: February 5, 2018
Photo by Animal Liberation Victoria

In lesson 1 I explored the way in which larger animal advocacy organizations focus mainly on asking participants to sign petitions and make donations in their campaigns. It was established that such actions are most consistent with the “little effort paradigm,” where organizations who ask the least of people are able to bring in the most amount of participants and donations.

Organizations putting less emphasis on actions like these and more effort into encouraging people to become vegans depart from this little effort paradigm. There are debates in the animal advocacy movement about how hard it is to become vegan – obviously, the difficulty varies from individual to individual, depending on their circumstances. However, it is clear that making the change to a vegan lifestyle requires far more effort than making a donation or signing a petition. As a result, organizations with a primary focus on advocating for veganism tend to attract less resources and therefore require more grassroots organizational forms.

Beyond departing from the little effort paradigm, vegan campaigns also do not lend themselves as easily to claiming clear cut victories, which are important in attracting donations from members of the public and other sources. While Irish sociologist and animal advocate Roger Yates has argued that each new ethical vegan can be claimed as a “little victory” on the path towards animal rights, these types of victories appeal less to a predominantly non-vegan donor base than others that result in improvements in the treatment of animals. As journalist Emma Brockes put it in her article on PETA Vice President Dan Matthews, veganism is a “harder pitch.”

Campaigns promoting veganism are unlikely to be supported by people who are not vegans themselves. From an organizational perspective, it makes much more sense to promote campaigns that already have the potential donor base “on side” than to attempt to persuade members of the public to make substantial changes to their consumption choices. PETA’s membership is made up of “half non-vegetarians and half vegetarians (but not necessarily vegans)” and Animal Liberation Victoria’s (ALV) membership profile is fairly similar (according to Patty Mark, ALV Vice-President, interviewed for my thesis).

Nevertheless, there has been a “vegan shift” in the animal advocacy movement, not just amongst more grassroots organizations but also amongst larger organizations. PETA is a good example. In the past, its campaigns tended to avoid using words like “vegan” or 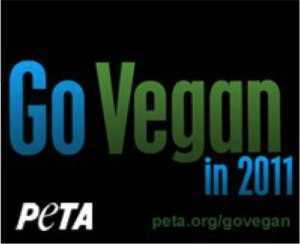 “veganism” – instead focusing on encouraging people to “go veg” or “go vegetarian.” This has begun to change in recent years. PETA’s campaign “Go Vegan in 2011,” launched in late 2010 and pictured here, had a clear vegan message.

If promoting veganism is so inconsistent with organizational considerations, how is it that larger organizations are increasingly promoting veganism? The answer comes down to how veganism is promoted. Smaller animal rights vegan organizations such as ALV generally promote veganism as the way to take the interests of other animals seriously. These organizations promote veganism as the “baseline” – the least people can do to take the interests of other animals seriously. While other actions are promoted, these actions are not generally framed as meaningful in their own right, without veganism.

In contrast, when larger organizations are promoting veganism (for those that do at all) it is as one way amongst many to take action on behalf of other animals. Veganism is offered amongst a “smorgasbord” of other options (according to animal rights lawyer Gary Francione, interviewed for my thesis). Francione maintains that PETA promote veganism not as a “moral baseline” but rather as a way to have “something for everyone” – from omnivores to vegans.

Humane Society of the United States President Wayne Pacelle recently published the book, The Bond: Our Kinship with Animals, Our Call to Defend Them. The book finishes with fifty things people can do for animals. Pacelle explains: “whether you go vegetarian or vegan, reduce consumption, or stop buying products from factory farms, everyone can do something.” While some larger organizations promote veganism as a great choice to make, they also present a range of other actions more consistent with the little effort paradigm as meaningful actions in their own right, regardless of whether the individual becomes a vegan or not.

Also, when large organizations do promote veganism, it is often a more limited version that is advocated, in contrast to more grassroots organizations. Elsewhere in its advocacy, PETA focuses on a wide range of different forms of animal exploitation, but their vegan campaign referred to above framed veganism in terms of food and a vegan diet. Even this vegan diet is promoted in a flexible way. PETA advises people “not to worry too much” about reading “every ingredient to check for tiny amounts of obscure animal products” and discourages people “from grilling waiters at restaurants about micro-ingredients” such as “a tiny bit of dairy products in the bun of a veggie burger.” While promoting a flexible vegan diet departs from the little effort paradigm, it does not depart as far as strict veganism that goes beyond diet (including other issues such as clothing and entertainment), which is promoted by more grassroots organizations such as ALV.

Despite different versions being promoted, this overall vegan shift seems significant, especially as an overwhelming majority of animals killed by humans are killed for food. There are ongoing debates about how – and how often – veganism should be promoted in the movement, in terms of the impact on animals. What I wanted to add to this debate here is the organizational dimension. How – and how often – veganism is advocated also has important implications for organizational forms. While veganism can and increasingly is being promoted by larger organisations, it seems that those who want to encourage members of the public to become vegan as their primary advocacy tactic may have to rely on more grassroots forms of organization.

Lesson 1, “The Little Effort Paradigm: Asking People To Do Less, Sustainably,” is available to read here.

If you’d like to read more about the themes covered in this post, see Chapter 4 of my thesis: ‘A sociological examination of the contemporary animal advocacy movement: Organisations, rationality and veganism’ – it is available for anyone to read, you don’t need a university log-in or anything like that.

You can also listen to audio of a talk by Nick Pendergrast on this topic: just lesson 2 (5 minutes) or all 5 lessons (15 minutes).