Taking a stand on a broad range of issues minimizes the potential for funding from foundations and corporations. How does this play into animal advocacy?
EXCLUSIVE Exclusive article or blog for Faunalytics.
Author: Nick Pendergrast | Published: March 7, 2018
Photo courtesy of APrivilegedVegan

The first four lessons in this series have explored the different ways in which veganism is promoted in the animal advocacy movement, as well as the related rights and welfare debate. This final lesson will look into another topic which is increasingly debated in the movement: intersectionality.

Intersectionality refers to the way in which “all forms of discrimination, including homophobia, racism, sexism, speciesism [discrimination based on species], ageism, disableism and bias based on weight and citizenship status, are rooted in the same system of oppression,” although “such systems of oppression intersect differently for different individuals.” In short, taking an intersectional approach means looking at the similarities between different forms of oppression and being concerned about all of them, rather than just focusing on one issue.

There are complex questions with no clear answers as to what exactly is required to be considered an intersectional animal advocacy organization in practice. Some organizations may be dismissed by intersectional advocates as a single-issue group. Maneesha Deckha provides some insightful contributions to this issue in her article “Disturbing Images: Peta and the Feminist Ethics of Animal Advocacy” (specifically pages 48-49).

She makes the case that animal advocacy that does not actively campaign against human oppression should not automatically be dismissed as incomplete or deficient. Intersectional and single issue animal activism can be viewed as a spectrum rather than necessarily an either/or situation (see below), similar to the rights and welfare debate covered in lesson 1.

Unfortunately, sometimes animal advocacy does not meet even this very low bar of recognizing and not contributing to forms of human oppression. An example is some of the campaigns operated by People for the Ethical Treatment of Animals (PETA). PETA carried out a controversial billboard campaign, which is shown and discussed below. The billboards featured a large female figure in a bikini, with the caption, “Save the Whales, Lose the Blubber: Go Vegetarian.” 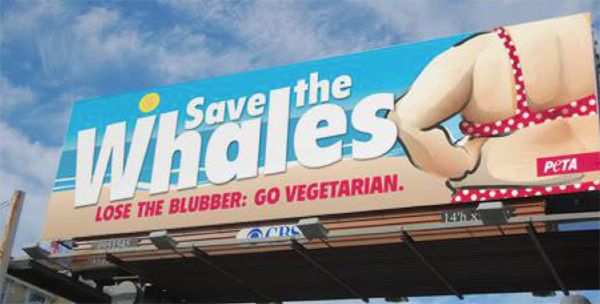 PETA’s ‘Save the Whales’ Billboard

This campaign was blasted as “fat-shaming” on the prominent feminist website Feministing. While PETA President Ingrid Newkirk pointed to the health concern of “America’s obesity epidemic,” her comment that “the majority of fat people need to have some discipline” ignores structural issues that contribute to obesity, such as class and ethnicity. This billboard, and PETA’s explanations of it, generally disregard health concerns and focus more on pressuring women to conform to dominant beauty norms. PETA’s press release for this billboard read:

Going vegetarian can be an effective way to shed those extra pounds that keep them from looking good in a bikini…Anyone wishing to achieve a hot “beach bod” is reminded that studies show that vegetarians are, on average, about 10 to 20 pounds lighter than meat-eaters…“Trying to hide your thunder thighs and balloon belly is no day at the beach,” says PETA Executive Vice President Tracy Reiman.

After widespread public outrage, PETA took down the billboard and replaced it with one that read: “GONE: Just like all the pounds lost by people who go vegetarian.” Even so, the fact that it ran the billboard in the first place demonstrates PETA’s willingness to participate in some of the more troubling aspects of the advertising industry’s representations of women.

PETA, in response to an article by sociologist Carol Glasser (a former Faunalytics team member) arguing that some of their campaigns are damaging to women, explained that: “PETA does make a point of having something for all tastes, from the most conservative to the most radical and from the most tasteless to the most refined, and our campaigns have proved extremely successful. In the three decades since PETA was founded, it has grown into the largest animal rights group in the world, with more than 2 million members and supporters worldwide.”

From an organizational point of view, when benefits such as the number of members attracted are considered, there is no doubt that PETA’s “campaigns have proved extremely successful.” There are organizational benefits to campaigning just on one particular cause, as it attracts the broadest range of financial support.

Organizations focused on just one particular issue tend to “develop a larger base of supporters” and are also more likely to attract resources, funds and political allies. In contrast, taking a stand on a broad range of issues can be detrimental financially. The organization INCITE! Women of Color Against Violence found this out after they were offered a grant of $100 000 from the Ford Foundation. Ford reversed the decision because they found out that INCITE supported the Palestinian struggle against occupation.

Taking a stand on a broad range of issues minimizes the potential for funding from foundations and corporations, as well as from other sources such as the public. In contrast, a single-issue approach typically maximizes the potential donor base from people and businesses.

This seems to suggest that grassroots activism has greater capacity to be intersectional, as foregoing these organizational benefits is not likely to be as big of a factor as it is for organizations needing to maintain adequate resources for ongoing costs such as paid staff and physical office space. Grassroots animal activism certainly has the most potential to be at the most intersectional end of the spectrum, referring to taking a stand against human oppression and collaborating with groups fighting human oppression.

Larger organizations are less likely to do this for the organizational reasons referred to above, but even moving from a purely single issue position to a “middle ground” position would be a positive development. Under this scenario, large animal groups would still campaign only for non-human animals, but they would recognize the legitimacy of human oppression and make sure they do not contribute to it in their campaigns.

Lesson 4, The Limits Of Promoting Veganism By Larger Or Smaller Organizations OR You can read other posts from the series here [Lesson 1 – Lesson 2 – Lesson 3]

If you’d like to read more about the themes covered in this post, see Chapter 3 of my thesis: ‘A sociological examination of the contemporary animal advocacy movement: Organizations, rationality and veganism’ – it is available for anyone to read, you don’t need a university log-in or anything like that.

You can also listen to audio of a talk by Nick Pendergrast on this topic: just lesson 5 (2 minutes) or all 5 lessons (15 minutes). 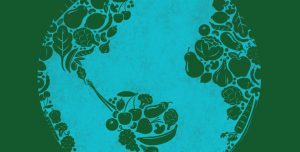 A Time For Pragmatic Vegan Advocacy

High-impact advocacy requires getting your hands dirty and being pragmatic. Our latest guest blog by Tobias Leenaert explores how.