A new study reveals that 'fake news' can help to change people's eating habits in a positive way.
FULL TEXT The full text of this article is available.
Summary By: karol orzechowski | This is a summary of an external study | Published: January 1, 2016
Photo by Flickr user pip_r_lagenta 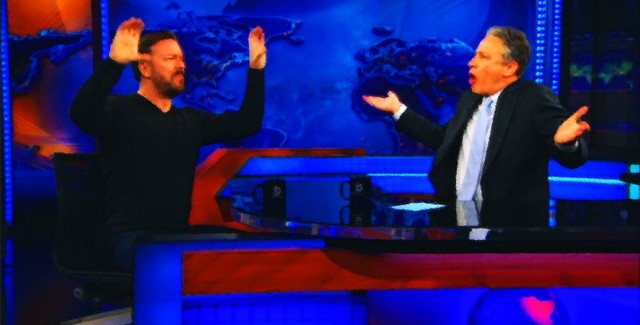 In today’s media environment, the general public gets their information from a variety of sources. While some people count on big newspapers and more “reputable” sources to get their information, The Daily Show and similar media have created a grey area where factual information is blended with entertainment value. These shows have the dual purposes of amusing and informing viewers. Two studies from the Lear Center’s Hollywood, Health, and Society program looked at how images of food on TV, as well as different kinds of news shows, can impact how audiences think about food. The research reveals that eight out of ten “prime time” television episodes depict food in some way, and programs like The Daily Show regularly feature segments on the food industry’s conflicting messages about nutrition.

In the first study, researchers looked at every episode of the top 10 shows on the five largest broadcast TV networks in the U.S. since 2004. In total, the study examined more than 1,300 episodes. Researchers found that depictions of food are pervasive in prime time TV and that there is a major difference between how people eat in comedies and dramas. Comedies were two and a half times more likely to show someone eating sweets than to show someone eating fruits and vegetables, usually in some humorous context. In the second study, researchers presented two groups of study participants with the same information, but one group received information in satirical form and the other received the information in a more traditional format. A third group received no information and acted as a control. While two-thirds of respondents who read traditional news sources were able to answer questions about specific food topics, a larger 80% of Daily Show viewers correctly answered the questions. Interestingly, the researchers found that people who watched The Daily Show were more cynical, but also had more hope for the future.

While this study did not deal with the consumption of animal products specifically, it does show the power of entertainment programming – especially some kinds of satire – in providing messages that resonate, remain with, and inspire audiences to action. As animal advocates are always looking for new kinds of approaches to get their message across, this is a good lesson to keep in mind.