What role can disturbing images play in educating the public about the true nature of animal farming, especially in light of recent "Ag-Gag" legislation?
FULL TEXT The full text of this article is available.
Summary By: karol orzechowski | This is a summary of an external study | Published: September 11, 2015
Photo by Flickr user sraproject 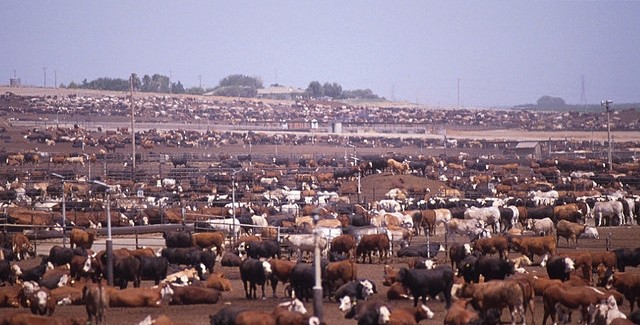 There are an endless stream of images depicting animal cruelty that have been obtained from factory farms. They are often picked up by the media, and sometimes even make it into classrooms where they are used as discussion points for courses such as ethics, food politics, psychology, and more. This paper examines the spread of disturbing images from factory farms, and the creation of meaning within them as a “site of education.” The assertion is that images of factory farming and other animal abuse shouldn’t just be viewed as political tools, but as aesthetic and pedagogical tools as well; they are things that teach us, inspire us, and motivate us to action, all at the same time. As teaching tools, these types of images are relatively new, and they have a great deal of potential as well as limitations. As the researcher says, these images “are contested on the production side because the agricultural industry leverages its power to keep them hidden. They are contested as subjects of study because bringing down the walls of the factory farm is not the same as bringing down the walls and operations of speciesist ideology.”

Many advocates know that the battle over the dissemination of disturbing images from factory farms and other places of animal exploitation is being fought around the world, especially in the U.S., where some states have permitted so-called “Ag-Gag” legislation. The idea that these disturbing images are “contested” has become very real. They are not only disputed ideologically, but also now through real laws and criminal charges. In some cases, simply taking photographs or filming footage has been deemed to be a terrorist act – the Animal Enterprise Terrorism Act prohibits “the taking of photographs, documentary footage, or other media for the purpose of exposure.” Though many animal abuse investigations aim to expose conditions and practices that are legal but ethically objectionable, laws now exist in some places to prohibit those images from being disseminated, or even taken in the first place. As the author here notes, “without the capacity to publish these acts of violence against animals, the propensity for success through civil disobedience is critically undermined.”

The political and industry opposition to advocates’ efforts to expose animal abuse has become known as “Ag-Gag.” But this resistance is itself being resisted. In 2013, there was a serious effort by the farming industry to prevent disturbing images from factory farms reaching the public, with Ag-Gag bills proposed in 15 states. None of these passed. Still, according to this study, at this time “the majority of U.S. states have some form of animal use protection law to address ‘animal enterprise/industry/research interference'” and the efforts to further criminalize the documentation and distribution of these images is troubling.

Animal advocates already face an uphill battle in getting most of the public to look at images of animal abuse. As this paper notes, “we should expect that viewing disturbing slaughterhouse images will be countered with avoidance, negation and resistance.” As humans, we’ve developed these “self-protective” strategies to block knowledge that might challenge our daily routines and our self-image. This paper highlights that the viewing these images can be “a disturbing and traumatic education.” Our goal, as we distribute, discuss, and debate these images, is to “hold the social reality of factory-farmed animals in public awareness and, ultimately, to encourage critical consciousness and action.” In the face of industry and (possible) state opposition, we need to remain aware of the importance of educating people about the truth.