Factory farming is on the rise in developing countries around the world. This review looks at the current impacts and mitigation of future ones.
ABSTRACT ONLY Only an abstract of this article is available.
Summary By: Faunalytics | This is a summary of an external study | Published: March 30, 2017
Photo by Flickr user oikeuttaelaimille 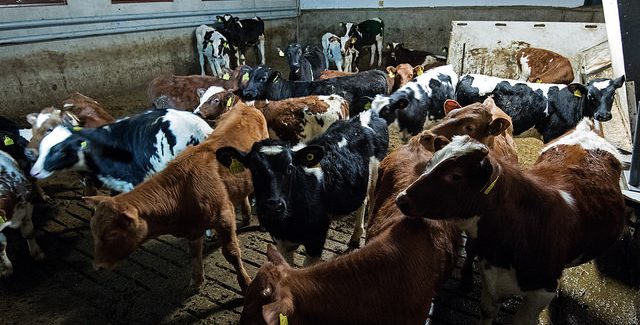 In the past several decades, industrial food animal production (or IFAP, sometimes also referred to as “factory farming”) has become the dominant form of producing meat, dairy and eggs in the US, and the practice has spread around the world as well. Factory farming is a high intensity, high output way of raising animals, but it also generates a host of social, public health, and environmental problems that are rarely if ever accounted for in the price of cheap animal products. While per capita meat consumption in high-income countries seems to be slowing or levelling off, the demand for animal products in low and middle income countries tripled between 1980 and 2004, and along with it has come the rise of factory farming in those countries. Factory farming and its proliferation has been studied fairly closely in the U.S. and European countries, but the rise of it in developing countries is still relatively unexamined. This review, from John’s Hopkins Center For A Livable Future, is an attempt to remedy that.

To try to get a sense of factory farming in the developing world, researchers “collected and synthesized publicly available information,” looking specifically at cow, pig, and chicken production in Brazil, China, Ethiopia, India, Kenya, Mexico, Myanmar, Turkey, Uganda, and Vietnam. The countries were identified by their income income level, but also a high volume of animal production. Using several different databases and aggregators, the researchers examined “food animal production statistics on projected trends, livestock industry characteristics, impacts of industrial food animal production, public engagement with food animal production, and comments about the quality of the document.” In doing this, they were able to identify a number of trends and themes, as well as gaps in information in the countries that they studied.

Perhaps unsurprisingly, production trends vary by species and geography, but overall, there is “significant growth” in animal production in general, and factory farming in particular, especially pigs and chickens. While factory farming is not yet the dominant form of animal production in most of the countries studied, it is growing, and appears to be the most established in Brazil and China. In general, the researchers found that national government policies favor growth and industrialization of animal farming, often in a way that supports both meeting domestic demand, and even producing enough animal products to become strong exporting countries. Economics is key. Meanwhile, there is a consistent lack of veterinary oversight of the industries in each country and there is little, if any, information regarding animal welfare in those same countries.  Factory farming companies in Western countries have begun making incremental changes towards better animal welfare, but it’s hard to know when and if such changes will make it to lower income countries. It’s an important matter: in the ten countries that were studied, the number of animals produced increased by 200 million from 2008 to 2013. Each year, more and more animals are being added, exacerbating animal welfare and the need for better regulations.

The general insights above are explored in much greater detail at the full study link below, as well as a more full discussion of environmental externalities. The researchers note that there are a variety of avenues for future research, from further analyzing government policies, conducting a more focused analysis of animal welfare regulations such as they exist, conducting studies of consumer perceptions, identifying “harm reduction strategies” to mitigate the impacts of factory farming, and more. For advocates, the results show that while we make certain inroads in Western countries, advocates in low and middle income countries around the world still face an uphill battle. Before we begin to celebrate a vegan revolution of sorts at home, we may want to connect with and support advocates in other countries working hard to make their country a better place for animals as well.