Increasing dairy farm welfare measures will require addressing farmers' concerns about time and costs.
ABSTRACT ONLY Only an abstract of this article is available.
PEER REVIEWED This article has been peer reviewed.
Summary By: karol orzechowski | This is a summary of an external study | Published: November 28, 2015
Photo by Flickr user Chesapeake Bay Program 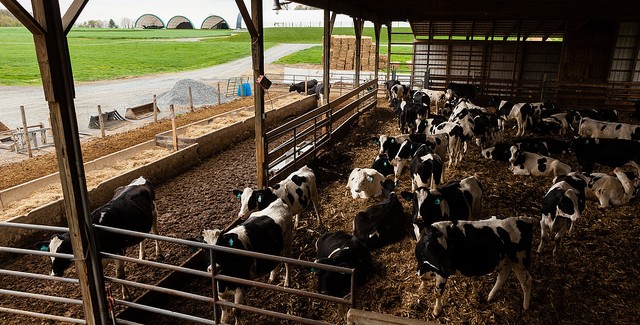 The improvement of animal welfare on farms requires several key pieces to fall into place. First, stronger policies; second, the implementation of any infrastructure necessary for those policies; and third, it requires the farmers and farm workers to implement the improved policies. Researchers say this last aspect has generally been the most neglected element of farm animal welfare and they note that “until recently, relatively little attention has been paid to the experiences” of people who actually implement animal welfare on farms. The researchers say this “voice of the producer” is important to take into account if animal welfare problems are to be taken seriously. Farmers need to be involved to make welfare measures happen.

In this study, researchers interviewed a dozen dairy farmers in the United Kingdom about welfare policies related to lameness in dairy cows. The interviews were long form and open ended, and gave insight into how farmers feel about the implementation of welfare measures. What they found was that “farmers used a range of different terms to describe the mobility of their cows, and this impacted on the urgency to treat.”  In other words, the way that farmers describe the condition of their cows is qualitative, and that means they see the welfare measures in a subjective way. Because the treatment of cows is “not always seen as possible” because of a lack of staff resources, this subjective opinion regarding which cows are bad enough to treat is even more important. Advocates need to recognize this slippage between subjective language and objective welfare goals, and work towards addressing the gap.