Determining The Best Indicators Of Dairy Cow Welfare: A Case Study From Italy

This study looks at the first ever national protocol for the welfare of dairy cows in Italy, where researchers developed practical and scientifically valid assessment methods to safeguard animal welfare.
ABSTRACT ONLY Only an abstract of this article is available.
PEER REVIEWED This article has been peer reviewed.
EXTERNAL STUDY This is a summary of an external study.
Summary By: Brenda Harriman | Published: April 24, 2018
Photo by Annie Spratt on Unsplash

Public concern over the welfare of animals used for food is steadily increasing. Reports show that many Europeans would like to know more about the living conditions of farmed animals. Despite this. the European Union does not currently have any specific rules for dairy cow welfare. To try and address this need, researchers have been developing assessment methods to safeguard animal welfare that are practical and scientifically valid. Previous assessments have focused mainly on the use of animal-based measures (ABMs), which are directly related to an animal’s experience and their ability to cope in their environment. Practitioners have assumed ABMs to be better indicators of animal welfare than other assessment methods, but, a recent study from the Italian National Reference Center for Animal Welfare aimed to find out the impacts on animal welfare when using non animal-based measures (N-ABMs) alongside ABMs.

In the study, the researchers developed a “risk-benefit assessment” for the welfare of dairy cows. The first step was to identify non-animal-based welfare factors. Then, researchers classed them as either “hazard characterizations” or “welfare promoter characterizations.” Expert veterinarians characterized and ranked the importance of a set of ABMs and N-ABMS that would form part of an assessment protocol. From these expert opinions, the researchers selected 52 factors that could affect either entire herds or specific groups of animals (e.g., calves, heifers, lactating cows, or dry cows). The researchers gave each factor a hazard and baseline level. They also gave 47 of the factors a benefit level. The researchers assumed that each factor fell under one or more of a set of five macro welfare categories: udder health, metabolic needs, locomotion and foot health, integument alterations, and behavior. The experts labelled the factors, positively and negatively, in relation to these five categories, and created a “hazard impact” and “welfare promoter impact” score for each of them.

The results of the hazard classification suggested that there are three management hazards with the highest potential impact on welfare. The first was the use of electric goads or sharp tools for animal handling. The second was the lack of scheduled foot inspection, trimming, and bathing for adult cows. And the third was the lack of access to drinking water. The results indicated that dirty water and water containers have the least impact on welfare. In terms of housing hazards, the three factors with the biggest impact on animal welfare were absent or inadequate bedding material, slippery floors in walking areas, and cubicles or deep litter that were too small to adequately house lactating cows.

The welfare promoter characterization showed that the maintenance of clean bedding material in the pen of lactating cows was the most important factor in terms of potential for positive impacts on welfare. Plus, this factor would positively affect most of the five macro categories of welfare. “Experience and training of the stock persons” and “animal grouping strategy” also showed potential for high impact on welfare. This was particularly in relation to animal behavior. Of the welfare promoters related to housing, the most important factors were the regulation of temperature, ventilation and humidity, the presence of optimal bedding material (plentiful, non-abrasive, absorbent), and the existence of cubicles and lying areas of adequate size and design.

Along with the N-ABMs, the researchers judged 18 ABMs in terms of how significant they were for measuring dairy cow welfare. They found the three most significant ABMs to be observation of lameness, annual mortality rate of calves, and annual mortality rate of adult cows. They found the cleanliness of the flank, leg, and udder to be the least important ABM regardless of the cow group being assessed (heifers, lactating, or dry cows).

Overall, the results of this study are a starting point for building the first Italian national welfare assessment protocol for dairy cows. In this study, expert veterinarians recognized the importance of both animal-based and management-based factors in assessments of dairy cow welfare. And animal advocates and welfare scientists can use the results to enhance the welfare of dairy cows. We can promote the implementation of on-farm assessments. Then, consumers can receive the information they so desire regarding animal welfare. Though this study applies to Italy specifically, the results are important globally. Farmed cows are not so vastly different from country to country, and many countries have similar farming conditions (including “factory farm style” conditions), so the results could have much broader implications.

Author: Brenda Harriman
Brenda has a B.Ed. and a B.Sc. in Biology, and has spent many years working in the nonprofit sector on environmental and social justice issues. Currently, however, she is involved in recruiting for a globally based tech company. In her spare time, Brenda loves to read, to ride bikes, and to go on walks and adventures with her cat, Pinky. 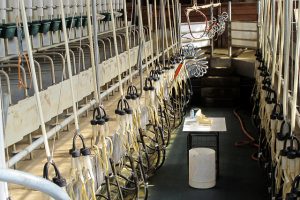 Research shows that identifying the most environmentally friendly way to produce milk is unclear, challenging the notion that dairy products are "sustainable."

Researchers propose a framework for a more just evaluation of the impacts of different high-yield agricultural methods.