Animal welfare certification systems can market towards specific value groups held by different socioeconomic demographics. Research makes it possible.
ABSTRACT ONLY Only an abstract of this article is available.
PEER REVIEWED This article has been peer reviewed.
EXTERNAL STUDY This is a summary of an external study.
Summary By: Angela Pang | Published: April 8, 2019
Photo by Derek Story on Unsplash

While a small minority of people are veg*ns, how many people take animal welfare into consideration when choosing their meat? Currently, label certifications indicating the production method of meat range from rarely seen to potentially misleading, with few studies focusing on the target audience.

These groups had differing willingness to pay (WTP) for different labels which correlated with different self-reported values of: self-direction; stimulation; hedonism; achievement; power; security; conformity; tradition; universalism; and benevolence. These values can be sub-divided into opposing dimensions of self-enhancement (hedonism, achievement and power) vs. self-transcendence (benevolence and universalism), and openness to change (stimulation, self-direction and hedonism) vs. conservation (security, conformity and tradition).

In the survey, participants could choose between three alternatives with differing labels (animal welfare and environmentally friendly), prices (between 200 to 500 yen, or $1.79 to $4.46 per 100 g), and origins (from the US, Australia, or Japan), or none of them.

Every class aside from not interested in production method expressed some preference for the animal welfare and environmentally friendly labels. Further analysis found that women were more likely to be in the label conscious, domestic preferring, and animal welfare preferring segments, while older consumers were associated with just the animal welfare preferring segment. The not interested in production method segment were more likely to be younger, male, making higher income, and living in a highly populated area.

While these certifications are new, an astounding 90% of consumers preferred them as labels. This type of research makes it easier for policymakers to prepare certification systems that market towards specific value groups held by different demographics. Furthermore, marketers can appeal to the “prosocial” nature of their consumers, informing them of the production method’s impact on animal welfare and the environment as they implement the widespread use of these labels. 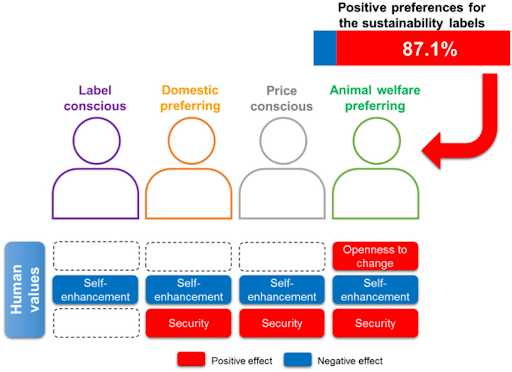 Author: Angela Pang
Angela Pang is a digital nomad and aspiring policymaker. She is currently pursuing an MSW at Columbia to focus on creating more humane policies for animals.

Faunalytics’ original study of clean meat acceptance included a measure of how much consumers would pay. This analysis provides more detail about those amounts.