While feedlots may provide more space for cows to roam, they can also cause other, potentially negative animal welfare outcomes.
FULL TEXT The full text of this article is available.
PEER REVIEWED This article has been peer reviewed.
Summary By: Faunalytics | This is a summary of an external study | Published: April 18, 2017
Photo by Flickr user schweizertierschutz 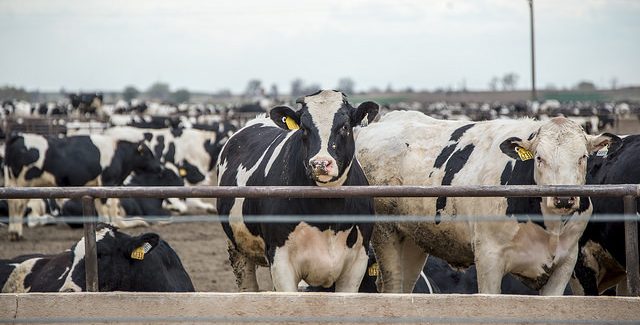 While all factory farming systems involve inherent cruelty to animals, those that allow animals to have access to the outdoors are often considered to be less cruel than those in which animals are confined indoors. However, outdoor farming operations raise their own set of animal welfare concerns. This article, published in Veterinary Science, discusses welfare issues associated with open outdoor feedlots for “beef” cows. Its findings and recommendations are based on previously published literature as well as the author’s observations in major areas of the U.S. where outdoor feedlots are used.

Problems with mud: In locations with high levels of annual rainfall, outdoor feedlots can get very muddy, leading cows to become cold, wet, and dirty. In order to prevent this problem, the author notes that, “when an outdoor feedlot is being built the single most important design feature is to do earth moving work so that the pens drain quickly after it rains.” They recommend building mounds in pens to give cows dry places to lay on, providing dry bedding, keeping “stocking densities” low to provide more space for individual cows, regularly cleaning surfaces of pens, and regularly assessing cows for cleanliness using a simple welfare scoring system such as the Welfare Quality protocol.

Heat stress problems: The author states that, in the U.S., on average 5,000 cows die each year due to heat stress. The main factors contributing to heat stress are a lack of shade, excessive weight brought on by being fed increasingly heavy diets, and cows with black hides. One simple method for helping to prevent heat stress is to build shades that are big enough to enable all cows to lie down in their shadows, but the author has observed that many outdoor feedlots in the U.S. do not have shades. In regards to assessment of heat stress, the easiest method appears to be scoring cow panting based on open mouth breathing and tongue extension.

Cow handling and treatment of newly arrived cows: Outdoor feedlots often handle large numbers of cows at one time, such as when cows are being loaded onto or off of transport trucks. The author believes that handling practices on large farms have actually improved over time, but notes that in the 1970s and 1980s, “cattle handling was extremely rough and electric prods were used on most of the animals.” Now, many farms use hydraulic squeeze chutes that restrain cows while helping them stay calm. The author credits these changes to increased efforts by feedlot managers to properly train workers and assess them using numerical scoring methods. “Many people who are concerned about animal welfare often assume that large farms have worse practices,” the author notes. “The large outdoor feedlots in the U.S. high plains have better cattle handling practices compared to the California pasture ranches.”

In conclusion, the author emphasizes the importance of using numerical scoring methods to assess the welfare of cows housed at outdoor feedlots. As previously stated, “the trend in animal welfare assessment is to use animal based outcome measures instead of directives on how to build animal housing,” and there are multiple simple assessment systems currently available. In particular, the paper recommends that outdoor feedlots evaluate animal welfare indicators based on three measures: panting score of cows in hot climates, cleanliness of the hide and legs of cows, and handling practices of workers.

For advocates, the paper provides an overview of animal welfare issues associated with outdoor feedlots that may also be extended to other farming systems in which animals are kept outside. It also highlights the possible effectiveness of using simple welfare assessment systems to help prevent some of these issues and offers an unexpected perspective on the handling practices of cows on large versus small farms. The information can be used to show people that even outdoor living conditions do not ensure positive animal welfare, while also providing tools to improve the immediate welfare of cows. 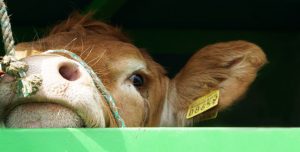 A review of cow transportation to slaughter in the U.S. and Canada looks at risk factors, and potential areas for improvement.