A study in Denmark shows that most people would choose "medium" welfare for pig products, but not "high" welfare, with price as the driving factor.
ABSTRACT ONLY Only an abstract of this article is available.
PEER REVIEWED This article has been peer reviewed.
Summary By: Faunalytics | This is a summary of an external study | Published: April 7, 2017
Photo by Flickr user animalpeopleforum 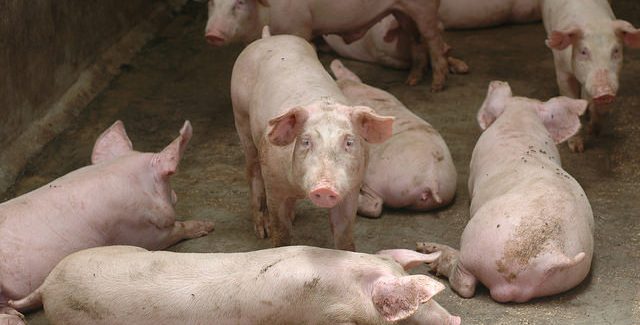 In many western countries, consumers seem to be increasing their interest in animal welfare. In response, animal industries, policy-makers, and researchers have an interest in “identifying the market potential of specialty products focusing on animal welfare that exceed minimal requirements imposed by law.” Consumers want more assurances of animal welfare than just the legal minimums.

To try to align their consumers’ consumption with their animal welfare interests, researchers are studying how best to establish labeling systems and representing animal welfare levels. With pig welfare, in particular, past studies of consumer preference have found that pork consumers want pigs to have improved welfare and more space, including outdoor access.

Because the public has limited knowledge of animal welfare, the choice task was kept simple and production systems were explained to respondents prior to the study. About half of the respondents who say they would usually buy high-level welfare products “would be willing to pay a price premium of 15% for high relative to medium level welfare.” According to the researchers, these results suggest that “with price premiums for medium welfare pork of 75-80%, it should possible to attain a market share of around 50%, which is a considerably higher market share than the current of 12%.”

For animal advocates, the study seems to show that “medium welfare” pig products have substantial market potential. Getting a large proportion of consumers to choose “high welfare” products seems to be a more challenging prospect. The harsh reality is that price is a major factor in whether people choose animal-friendly products and is arguably more influential than a sense of ethics toward farmed animals.