The welfare of pigs at slaughter can vary broadly from country to country depending on differences in stunning time and efficacy.
ABSTRACT ONLY Only an abstract of this article is available.
PEER REVIEWED This article has been peer reviewed.
Summary By: Faunalytics | This is a summary of an external study | Published: December 8, 2016
Photo by Flickr user james_michael_hill 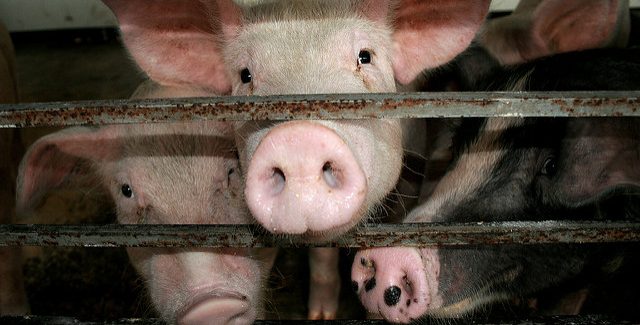 The concept of animal welfare is a contentious one for many animal advocates depending on their ideological position. But among the general public, the concept has come to provide a lens through which to understand animal issues. While a large percentage of the general public may eat animal products, they don’t want animals to be badly treated while they are alive or even during slaughter. At slaughter, “good welfare” includes ensuring that animals are comfortable during transport to the slaughterhouse, receive enough rest during transport, are fully stunned (i.e., unconscious) before slaughter, and are sacrificed using the most humane slaughter method. In parts of the E.U., the Welfare Quality® (WQ) program has established a set of protocols for guiding and measuring the welfare of farmed animals, both on the farm and at slaughter. However, due to a lack of studies exploring pig welfare in slaughterhouses, a proper scoring scale and WQ assessment for pigs doesn’t yet exist (at press time).

This study was a response to this lack of standard measures for pig welfare at slaughter. The study authors outline their reasons for defining these measures in simple mathematical terms:

If Slaughterhouse A has 20% of animals affected by Parameter X for years, the manager can defend that this is impossible to be reduced. Nevertheless, if when compared with other slaughterhouses there are some where the percentage is 2%, it means that 20% can actually be reduced.

They also found that between 0% and 90% of stunned animals showed signs of regaining consciousness prior to slaughter, an unacceptably broad range that warrants cause for great concern. At 27 of the 42 slaughterhouses assessed, over 10% of stunned animals recovered before slaughter. in light of these results, the researchers note that CO2 stunning is a more effective stunning method than electric shock. For animal advocates, the study will either provide evidence to support the implementation of more welfare-friendly slaughter methods, or it will provide evidence that an abolitionist approach is necessary.