A new blog explores the demand for ivory from the consumer side, and how advocates might refine their campaigns to hit the right notes.
EXCLUSIVE Exclusive article or blog for Faunalytics.
Author: Faunalytics | Published: November 30, 2016
Photo by Flickr user FlickrFavourites 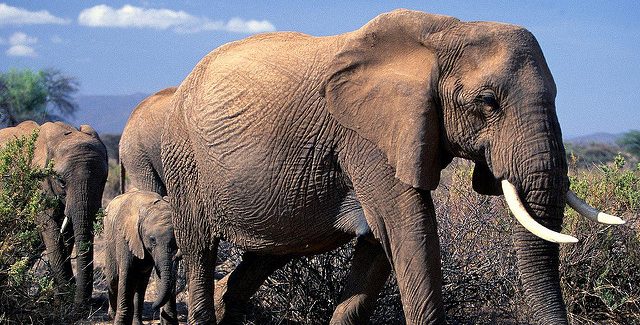 The illegal wildlife trade is a $20 billion industry, making it the largest illegal form of trade other than drugs, firearms, and human trafficking. A variety of lesser known animals have been devastated by illegal trade, including the Ploughshare Tortoise of Madagascar, the endangered totoaba fish found only in the Gulf of California in Mexico, and the Pangolin or “scaly anteater,” which is currently the world’s most trafficked animal.

But it is the elephants and rhinoceroses whose tusks fuel the ivory industry that have been the focus of most anti-poaching campaigns—and for good reason. The number of rhinos poached in South Africa alone increased from 13 in 2007 to a record 1,215 in 2014. Since 2009, African savannah elephant populations have dropped by 60% in Tanzania and 50% in Mozambique. And despite a slight decrease in the number of African elephants poached since 2011, poaching rates still exceed the normal growth rates for these animals. A total of 14,606 elephants were killed between 2003 and 2015.

The Convention on International Trade in Endangered Species of Wild Fauna and Flora (CITES) is an international agreement between governments that controls the legal trade of all species through a licensing system. They also spearhead strategies to curb illegal wildlife trafficking. Between September 24 and October 5, CITES held its 17th meeting of the Conference of the Parties (CoP17) in Johannesburg, South Africa. The agenda included a commitment to target the entire illegal trade chain, from poaching to transport across national and international borders to illegal sales. A key pillar in this approach, called demand reduction, involves identifying ways to reduce market demand for trafficked products.

The CoP17 document, Demand Reduction Strategies to Combat Illegal Trade in CITES-Listed Species, states that demand reduction strategies “are most effective when they take an objective, evidence-based approach based upon the latest available research.” This research should focus on identifying the characteristics of individuals who purchase trafficked items and determining why they are motivated to do so. Understanding these underlying motivations is necessary to develop public awareness campaigns that target attitudes, opinions, and behaviors that can be changed.

A number of animal advocacy and wildlife conservation organizations have conducted such research, mostly in China and Southeast Asia, where ivory markets are strongest. For example WildAid, an organization whose mission is to end the illegal wildlife trade, conducted a survey of 961 Chinese residents in Beijing, Shanghai, and Guangzhou in 2012 to better understand awareness of declining elephant populations and ivory purchasing behavior. WildAid found that less than half (47%) of participants thought elephant poaching is a problem, only 33% believed elephants are poached for their tusks, and 33% also believed that ivory comes from elephants that die naturally.

Between February and September of 2014, National Geographic Society and GlobeScan, an international research firm, studied what drives demand for ivory in five countries with significant ivory markets: the U.S., China, the Philippines, Thailand, and Vietnam. The study is unique in that it mapped relationships between consumer values, attitudes, knowledge, and behaviors related to ivory. By understanding these relationships, we can identify those attitudes and behaviors that can be changed and those that most likely cannot. This, in turn, enables conservation and advocacy groups to run more effective anti-poaching campaigns aimed at ultimately reducing demand for ivory.

The study included in-depth interviews, focus groups, and a quantitative survey (conducted online and in person). Results are summarized in the report, Reducing Demand for Ivory: An International Study. The study revealed five ivory consumer groups, two of which were of primary interest. The first group, Likely Buyers, made up 22% of the study sample. Their primary motivation for purchasing ivory is to gain social status, with 7 in 10 individuals regarding ivory as a status symbol. The second group, Firm Rejecters, made up 16% of the study sample. Though these individuals are average to high income earners, they express no interest in purchasing ivory and, unlike Likely Buyers, do not consider ivory a status symbol. 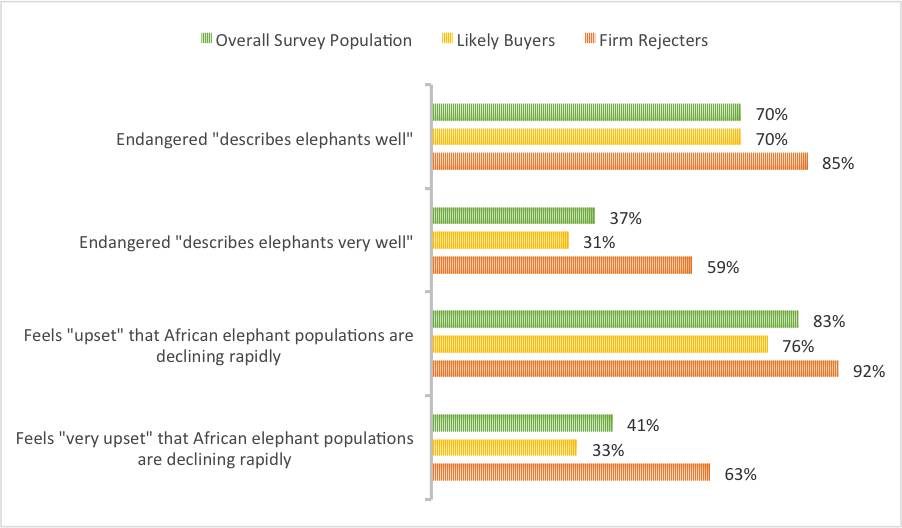 Also significant is that nearly the same number of Likely Buyers (67%) as Firm Rejecters (72%) support government bans on buying, selling, importing, and exporting ivory. The top three reasons for supporting an ivory ban include concern for the declining African elephant population, the increase in the number of poached elephants to meet ivory demand, and the link between ivory trafficking and other criminal activities (e.g., human and drug trafficking).

What is especially interesting is that this overall support for a ban is not related to a decrease in intent to purchase ivory. In fact, analysis of consumers’ motives for buying ivory revealed that respect for elephants and awareness of their endangered status actually increases the perception of ivory as “rare and beautiful.” This attitude reflects Likely Buyers view of ivory as a status symbol. Therefore, ivory is considered an ideal gift because it makes both the giver and receiver feel “confident, happy, respected, important, proud, and powerful.”

So what do these findings mean for animal advocates?

First, the report authors acknowledge that a ban or limit on the ivory trade across all five consumer groups is not linked to a reduction in demand for ivory. This contradictory relationship makes advocacy work challenging, because campaigns aimed at exposing threats to elephants may not change attitudes about the value of ivory.

That said, results from the 2012 WildAid survey did show that one in three Chinese residents believes that ivory comes from elephants who die naturally. And a 2007 International Fund for Animal Welfare (IFAW) survey revealed that over 60% of the Chinese public did not know that ivory comes from dead elephants. So campaigns aimed at educating the public about the source of ivory may be effective.

IFAW’s 2010 “Mom, I have Teeth” public service announcement (PSA) was an attempt to do just that. Launched in 2010, the poster pictured a mother and her calf walking together on an African savannah. It includes written dialogue between the two, with the calf saying to the mother, “Mom, I got teeth. Aren’t you happy I got teeth?” IFAW’s Grace Ge Gabriel, Regional Director for Asia, explains that the word for ivory in Chinese is “xiang ya,” which means elephant teeth. As such, many have come to believe that elephant teeth fall out naturally just like human teeth, and that ivory is therefore “a painlessly obtained, renewable product.” The PSA was an attempt to educate the public that elephants are in fact killed— illegally—for their “teeth.”

Three years after they launched their PSA, IFAW conducted a follow-up survey to determine its effectiveness. Because the campaign had already launched at the time of the survey, IFAW was not able to survey the same group of people before and after the campaign and compare their responses. Rather, they surveyed a control group of individuals who had not seen the PSA and used their responses as baseline data.

Notably, IFAW found that 18% of those who had not seen the PSA but were past consumers of ivory would still consider buying ivory in the future. However, only 8% of those who viewed the PSA and were past consumers of ivory would consider buying ivory in the future. This difference suggests that the PSA had some effect on consumers’ buying intent. In addition, 66% of past ivory buyers who viewed the PSA indicated they would “definitely not” buy ivory in the future; only 33% of past ivory buyers who did not see the PSA indicated the same. Again, this shows that the PSA likely impacted individuals’ decision to continue buying ivory.

In 2013, WildAid also launched a campaign to reduce demand for elephant ivory. They have released a series of PSAs and billboards featuring celebrity figures, including Chinese basketball star Yao Ling, US actor Edward Norton, and England’s Prince William. WildAid’s campaign focuses on educating the public about the threat of ivory poaching to elephant populations. The use of these celebrity ambassadors who commit to an ivory-free lifestyle should also help to reduce the value of the product as a status symbol and, in turn, reduce demand for ivory overall.

Finally, another possibly effective strategy for advocates might be to highlight the negative impacts of the illegal ivory trade on local economies. For example, humans and wildlife often compete for resources in small communities, with large species like elephants trampling crops and predators such as lions killing animals used for food. As such, opportunities for locals to earn money by killing these animals as part of an organized poaching group is often a survival tactic.

And while many advocates rightly question the animal welfare implications of ecotourism, charismatic species like elephants and rhinos are a major draw for tourists visiting African and Asian countries. When their populations decline due to poaching, so does the income of communities that rely on these animals as a major tourist draw.

Additional research aimed at understanding the motivations of ivory consumers will help animal advocates continue to refine their campaign messages, reduce demand for ivory products, and help us all to contribute to the restoration of our world’s most endangered species.