Could A Legal Ivory Trade Ever Work?

Efforts to save wildlife by creating and maintaining a legal trade in ivory is unlikely to work in practice due to corruption and insufficient populations.
ABSTRACT ONLY Only an abstract of this article is available.
PEER REVIEWED This article has been peer reviewed.
Summary By: karol orzechowski | This is a summary of an external study | Published: October 5, 2015
Photo by Flickr user wwarby 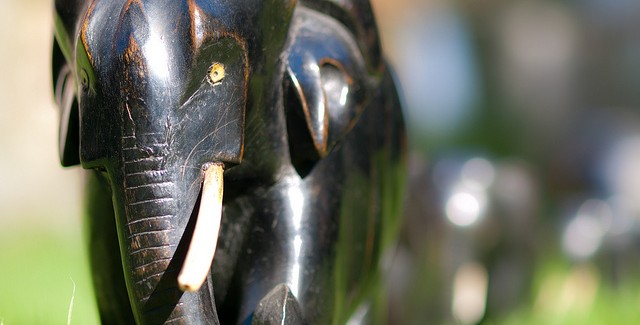 The illegal hunting and poaching of wildlife is a serious problem in many parts of the world. Over recent years, rhinoceros populations have been decimated to harvest rhino horns. When ground and consumed, this product is considered to be very important in some branches of traditional Chinese medicine. The killing of elephants for their ivory has been a problem stretching back over many decades. The trade in elephant ivory was banned in principle in 1989 when elephants were placed in the highest category of protection under CITES. However, they continue to be slaughtered for their tusks and the debate persists over the best way to combat poaching.

One of the proposed solutions to the illegal wildlife trade has been the establishment of legal alternatives to the black market. The rationale is that demand for the illegal item is satisfied if a limited amount of legal product is provided to the market place, and so the need for black market ivory is reduced or eliminated. For rhinos, some projects have tried to tackle the issue by removing the horns from live animals. The ivory from elephants’ tusks would have to be removed after their death, and the question of which elephants would be killed can’t comfortably be answered.

The reason that this debate still matters is because, despite the ban on the trade in ivory stretching back more than twenty years, an illegal market for tusks still proliferates. The problem is devastating populations, and the slaughter is on the rise. The authors of this article published in Conservation Biology note that elephants may now be “facing the most serious conservation crisis since 1989.” The total population of forest elephants has declined by 62%, and 76% of African savannah elephants were killed between 1985 and 2010. In addition, “previously secure populations of African savannah elephants in eastern and southern Africa are under growing threat” as a new wave of poaching spreads. Between 2009 and 2013, the Selous Wildlife Reserve in Tanzania lost 66% of its elephants. It is due to this grim news that people are again considering the option of a legal trade to try to stem the spiralling problem.

Exacerbating the desire to poach is the fact that elephant ivory fetches enormous prices per unit, which is likely to encourage poaching regardless of the existence of a legal trade. Also, wild populations of elephants have been reduced to the point being unlikely to be able to sustain a permitted trade. These factors lead the the authors of this article to their key point:

Within that context, effective management of a legal ivory trade would require that systems be in place to ensure that illegal ivory cannot be laundered in significant quantities into the legal market. First, the supply of legal ivory entering the market must be controlled, with little illegal ivory allowed to enter the trade. This means that illegal hunting must be prevented; legal hunting well managed with scientifically based quotas to ensure sustainability; and only legally designated animals are removed so only products from legally sourced animals enter the market.

Stating what is needed is one thing, but implementing it is another. Though the authors say that such a system could work well “in theory,” the likelihood of corruption in such a fragile and volatile supply chain cannot be understated. Incidentally, some of the countries closely involved in the ivory trade are also ranked as some of the most corrupt. The study concludes that all of these factors mean that the task of “tackling corruption throughout an illicit ivory trade network that permeates countries across the globe, many of them currently with weak governance, will take decades, if it can ever be achieved.”

For most advocates, the proposition of a legal trade in ivory is hard to stomach. To suggest that these wild animals can be, in essence, farmed to meet a particular resource demand is unlikely to be popular among many animal lovers, even without taking into account the potential implications of corruption within the process. Though some people may think that the idea of a legal trade in ivory is attractive in principle, in practice even people who have seriously considered its working are skeptical that it can be implemented with a great degree of success.