Ivory Trade Is Not The Only Threat To Elephants

Resistance to conservation is related to the marginalization of poor populations, and not all human-elephant violence is related to ivory.
FULL TEXT The full text of this article is available.
PEER REVIEWED This article has been peer reviewed.
Summary By: Faunalytics | This is a summary of an external study | Published: May 30, 2016
Photo by Flickr user noodlefish 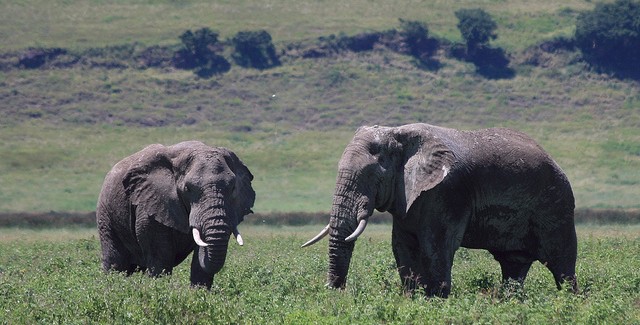 A recent resurgence of elephant killings in Tanzania has been widely attributed to the growing ivory trade. This article, published in Land Use Policy, examines an alternate factor: human-wildlife conflict.

The authors present a case study analyzing a 2009 incident in which a large group of people from Engare Nairobi, a village in the Western Kilimanjaro, chased a herd of elephants towards a cliff and killed six of them. The case study uses a “web of relations” approach to examine both short and long-term factors that contributed to the incident. The authors learned about these factors by conducting in-depth interviews with 58 villagers as well as speaking with local government officials and representatives from conservation and tourism organizations.

In the end, the authors determine that the incident was not related to the ivory trade but stemmed from a chain of natural and social factors centered on human-wildlife conflict, as villagers felt powerless to stop elephants from encroaching on their increasingly scarce resources. At the time of the incident, the area was going through a severe drought and both human and elephant populations were growing. Additionally, both the national government and international conservation organizations were increasingly earmarking land around the village for wildlife conservation purposes, leading to growing numbers of elephants who entered the village and raided crops. Finally, villagers were frustrated because they had no authority to determine land use policies and were repeatedly ignored when they raised issues about human-wildlife conflicts, leading them to kill the elephants as an act of resistance.

In summary, the authors state that “the immediate cause of this event was resistance by villagers who have experienced increasing crop loss caused by elephants, and who feel marginalized and disempowered by conservation practices.” They recommend that “local communities should… be involved and have substantial influence in decision-making on matters pertaining to land use and wildlife conservation,” and suggest that “wildlife conservation also needs to take much more seriously the challenge of benefit sharing with local communities and compensation for wildlife damages.” An additional takeaway from the article for animal protection advocates is that, while conservation policies are meant to protect wildlife, if they do not take into account the needs and concerns of local communities, they may ultimately backfire.