5,487 species of mammals are endangered, with human expansion into natural habitats and hunting for food being the two biggest threats they face. Conservation programs have demonstrated success in recovering species populations, and can work to improve their chances of survival.
FULL TEXT The full text of this article is available.
EXTERNAL STUDY This is a summary of an external study.
Summary By: Faunalytics | Published: October 13, 2008
Image by Pixabay user Free-Photos

According to The Red List of Threatened Species, the populations of more than half of the world’s mammalian species are declining and at least one quarter are at risk of extinction. The biggest threat to mammals is loss of habitat, including deforestation.

This year’s Red List of Threatened Species examined 5,487 species of mammals, and concluded that 1,141 are currently on the path toward complete disappearance. Moreover, the authors believe this estimate is actually low, due to lack of data, and that more mammalian species may be facing extinction.

Approximately 40% of mammals are compromised due to human expansion into their habitats, which is especially important across the tropics (areas with highest diversity of land-based animals). South and Southeast Asia are also regions where extinctions will be likely to occur in the future, due to the growing size and living standards of humans in the regions.

Hunting for food or medicine is the second biggest threat to animals. On the positive side, where hunting has been controlled and conservation programs implemented, it has been demonstrated that entire species (such as the African elephant) can recover.

For marine animals, bycatch (the unintentional but largely unavoidable entanglement of non-target species in commercial fishing nets) is the biggest factor behind current declines, affecting 79% of marine animals.

The Zoological Society of London is developing a so-called “Dow Jones index” for biodiversity, which they hope will more accurately assess the status of the world’s animal species. 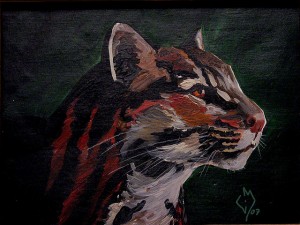