Using GPS to monitor animal social networks can eliminate some need for direct observation and save time, money, and potentially animal stress.
ABSTRACT ONLY Only an abstract of this article is available.
PEER REVIEWED This article has been peer reviewed.
ANIMAL RESEARCH This article involves research on captive animals, which Faunalytics opposes.
Summary By: Jen Wyglinski | This is a summary of an external study | Published: April 12, 2016
Photo by Flickr user kleinz 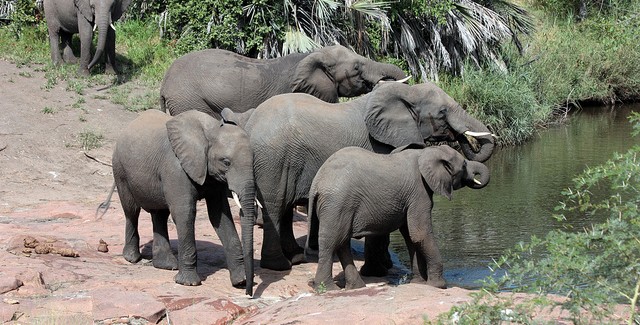 Gaining an understanding of social relationships within animal groups can help improve welfare conditions for both captive and free-roaming wild animals. For example, keeping animals in their known social groups could help decrease stress in zoos, and having knowledge of social grouping in the wild could help lessen human-wildlife conflicts. However, the commonly used methods of studying animal relationships, namely observing and documenting behavior and patterns, are often inaccurate and time-consuming.

This paper, published in Applied Animal Behaviour Science, offers an alternative method of determining relationships among animals: by using GPS technology. The researchers tracked eight elephants at the San Diego Zoo Safari Park over nine 24-hour periods using GPS devices attached to collars. They then calculated average distances between individual elephants in the morning, afternoon, and evening. They found significant correlations between their results and data on behavioral interactions and dominance obtained from both a previous observer study and discussions with zoo staff.

The researchers conclude that “GPS technology can be used as a proxy tool in determining social relationships.” They suggest that the technology can aid in the “daily management and potentially stressful situations (e.g. transport, shifting animals between exhibits, etc.) to mitigate any negative changes in welfare,” as well as planning and managing wildlife reserves and carrying out “future animal behavior research in both wild and zoological settings.”

For advocates, the article will no doubt raise issues regarding keeping animals in captivity and using captive animals for research. It should also be noted that seven of the eight elephants used in this particular study were part of a controversial import from Swaziland in 2003 by which the San Diego Zoo falsely claimed to be rescuing the animals from a planned cull.

Our Faunalytics Index for July 2018 looks at the favorability and credibility of animal protection, the survival of manatees, and much more.