People of all races have similar relationships with their companion animals. So why has previous research largely focused on the experiences of white animal guardians?
FULL TEXT The full text of this article is available.
PEER REVIEWED This article has been peer reviewed.
EXTERNAL STUDY This is a summary of an external study.
Summary By: Ozy Frantz | Original Study By: Kisavi-Atatah, C. W., & Atatah, P. E. (2022) | Published: August 16, 2022
Photo by Yerlin Matu on Unsplash

Companion animals are ubiquitous in the U.S., regardless of one’s demographic. However, previous research on human-companion animal relationships has focused mainly on white guardians. The authors of this study point out that Black, Indigenous, and People of Color (BIPOC) may have a unique relationship with their companion animals: for example, research has found that Black people are less likely to have a companion animal than white people. However, it’s unclear what, if anything, this disparity tells us about BIPOC communities and their beliefs about animal guardianship.

The researchers in this study decided to take a closer look at the relationships between BIPOC animal guardians and their non-human companions. They created four focus groups, each with participants of a different race: Hispanic, Black, Asian, and white. Each focus group had four to five participants. The researchers asked them about how they think of their animals, their experiences being an animal guardian, and other questions related to living with a companion animal.

All participants except for one grew up with animals in their family. Children who grow up with companion animals may have stronger relationships with companion animals when they’re adults. One participant who identified as African said that animals in African culture are supposed to be watchdogs and hunt for themselves. According to this participant, her family members and other members of the African community found it confusing that she was close and compassionate with her dog and that she hugged her dog.

There were several limitations to the study. Participants in a focus group often influence each other’s responses, and because the researchers only organized one focus group for each race, it’s difficult to know how much the influence of individual participants affected the group’s opinions. Further, the researchers sought out respondents who indicated a relationship with companion animals in the past. The study doesn’t say anything about what people who don’t have companion animals think about them. 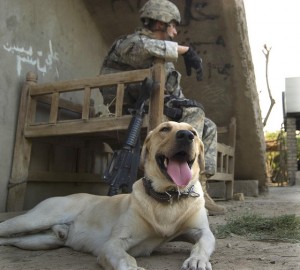 Some soldiers in the field will go to extraordinary lengths to help stray dogs, and even bring them back home, though the relationship is likely to be mutually beneficial.