A new study looks at the role of "eating identities" and how they inform individuals' intentions to eat red meat or reduce meat consumption.
ABSTRACT ONLY Only an abstract of this article is available.
PEER REVIEWED This article has been peer reviewed.
Summary By: Faunalytics | This is a summary of an external study | Published: April 11, 2017
Photo by Flickr user druggedmoon 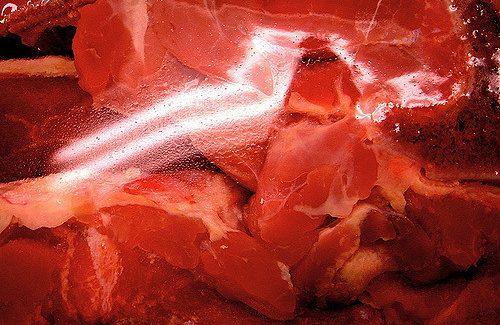 Persuading people to reduce or eliminate the amount of meat they consume is not an easy task. This is because the habit of meat eating is maintained and reinforced through a variety of societal and psychological factors. Therefore, advocates must identify to counter these factors and encourage people to change their beliefs and behaviors. This paper, published in Social Science & Medicine, investigated the psychological variables involved in reducing red meat consumption (RMC).

The authors describe two related experiments. The first explores RMC in the context of Ajzen’s theory of planned behavior (TPB), the theory that intention to perform a behavior is the best predictor of that behavior and that intention is influenced by three factors: a person’s attitude towards the behavior, subjective norms about the behavior, and perceived behavioral control (PBC). Participants were recruited from a university in southern Italy and asked to keep a food diary for a week. Then, they were asked to respond to a questionnaire designed to measure intentions to eat red meat in the near future, TPB variables in relation to RMC, and self-identity as healthy eaters and meat eaters.

Results showed that the strongest positive correlates of intentions to eat a reduced red meat diet were: PBC (perceived control participants felt they had to reduce RMC); affective attitude (experience of eating meat as unenjoyable or enjoyable, boring or exciting, etc); and instrumental attitude (considering eating meat as not worthwhile or worthwhile, harmful or beneficial, etc). Identifying as a meat eater was negatively correlated with intentions to reduce RMC. A regression model combining variables at different steps also showed that major predictors of intentions were PBC, affective attitude, instrumental attitude, and meat-eating identity, but not healthy-eating identity, past behavior, or subjective norm (the extent to which participants perceived that those around them wanted them to reduce eating red meat).

The authors note that these findings are consistent with those from previous studies showing that perceived control over consumption and attitudes towards food are the most important predictors of meat consumption. They also reiterate the importance of self-identity and state that “those who perceive themselves as meat eaters tend not to intend to reduce their RMC.”

The second experiment tested the impact of using text messages on reducing RMC. All participants, also students from a local university, kept a food diary for the first week of the experiment. During the intervention phase, the participants kept a diary for another week while half of them received daily text messages reminding them to reduce RMC. At the end, all students filled out a questionnaire similar to the one used in the first experiment.

Results showed that in week one, 62.3% of all participants ate above the recommended value of at most two portions of red meat per week. However, following the intervention, 56.6% of the participants in the control group ate above the recommended value of RMC compared with 23.3% of participants in the message condition group. An analysis indicated that the text messages worked by increasing participants’ self-identification as healthy eaters and reducing their meat-eating identity, which in turn increased their intentions and, consequently, their actions in reducing RMC.

The authors conclude that “text message interventions could be a very useful strategy to encourage young adults to change their eating behaviors.” They also hypothesize that identification as a healthy eater was a strong predictor of meat consumption in the second experiment but not the first one because students who received text messages adopted the identity of healthy eaters during the study through self-monitoring and repeated practice. The authors recommend that future research investigate the impact of RMC reduction messages on different demographics and through different communication channels using varied content.

A combination of strategies can deliver the best results in reducing meat demand and consumption, in the interest of animals, the environment and public health.