Should people eat insects as an alternative to meat? What are the ethical implications of such a shift in "protein sources?"
ABSTRACT ONLY Only an abstract of this article is available.
PEER REVIEWED This article has been peer reviewed.
Summary By: karol orzechowski | This is a summary of an external study | Published: January 21, 2016
Photo by Flickr user killerturnip 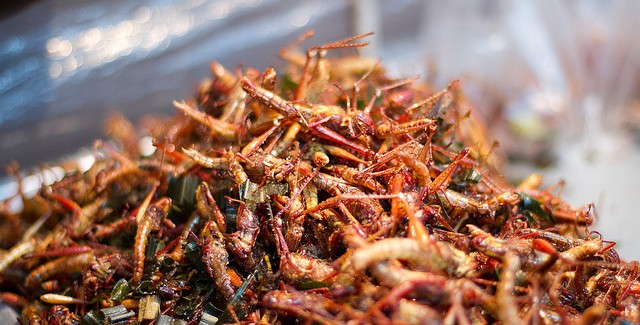 About two billion people currently “supplement their diet” by eating insects (entomophagy). Some institutions, including the United Nations, have advocated for an increase in insect eating to deal with coming food shortages. Humans eat more than 2,000 different species of insects and they are generally considered by many to be a very “efficient” source of protein. They require relatively little energy to “farm” and deliver a high level of protein relative to that energy when consumed. However, in most western countries, eating insects is still very much taboo. While it may be a “rational solution” to challenges of feeding a growing world population, there are considerable aesthetic obstacles (in addition to the ethical issues that arise). Most people in the West find the idea of eating insects rather disgusting.

In this study of university students, researchers evaluated their willingness to “attend an event at which foods that contain insect-based ingredients are served,” where insects would be both cooked and eaten. The idea is that “one method of convincing a wider swath of the population to sample insects as food is to engage in direct educational efforts about the benefits of eating insects,” but we must first know how willing people are to even attend such events. Overall, they found that “priming” the students by cooking the insects can increase a willingness to consume it, while most respondents are not willing to consume the food if they are reminded of its source. Interestingly, the authors suggest that one way to market “insect meat” to “conscientious omnivores” may be to repackage it using a word that doesn’t remind consumers of insects in “much the same way that one cannot deduce from the etymology of the word that ‘seitan’ is an alternative protein source that consists of wheat gluten.”

Animal advocates should have serious ethical concerns with increasing entomophagy and the potential suffering of insects (who are part of the animal kingdom). This particular study shows that people in the West are unlikely to adopt entomophagy widely, but also that there are ongoing efforts to increase the practice of insect eating. What impact this could have on the net cruelty of our food system remains to be seen, but the implications for insects are concerning.