The authors of this study believe that it is a matter of time before entomophagy, or eating insects, gains popularity in the West. They conclude that once there is a safe and steady supply, the demand will take care of itself.
ABSTRACT ONLY Only an abstract of this article is available.
PEER REVIEWED This article has been peer reviewed.
Summary By: Karol Orzechowski | This is a summary of an external study | Published: August 4, 2015
Photo by Flickr user urasimaru 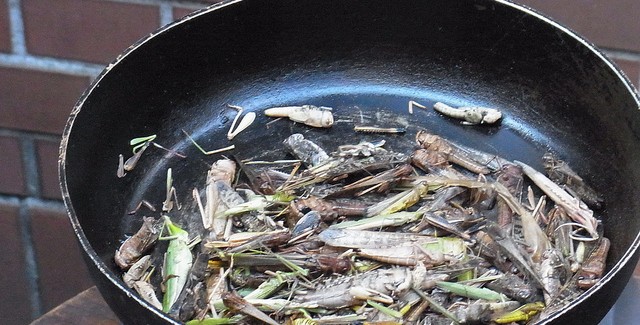 Eating insects, also known as “entomophagy,” is a practice that occurs in many countries, yet it is something that most of the Western world does not engage in and considers taboo. In recent years, the practice of eating insects has come under increased scrutiny and consideration, with much of the discussion being motivated by their “high conversion efficiency.” In essence, insects are generally able to convert nutrients into protein at a better ratio than other animals, and therefore many scientists have posited that eating insects instead of the usual animals farmed for food would be better for the environment.

Still, the problem of taste and taboo persists, and acts as a major barrier to the practice spreading more broadly to Western countries. Previously, Faunalytics has covered articles that examined the kinds of consumers that might be ready to adopt eating insects as part of their diet. The study found that early adopters of entomophagy could act as trendsetters in the West, and that the group most likely to do this is primarily composed of younger males that are open to trying novel foods and, at the same time, interested in reducing their environmental impact. However, the study concluded that, even with a trendsetting group, most people would be more likely to eat less meat, or no meat, than to start eating insects.

A new study, published in Trends In Food Science & Technology, looks at the spread of entomophagy in a different way — through the lens of the “diffusion of innovations.” You may recall this theory was applied in a previous Faunalytics article about animal advocacy, and that diffusion works through five stages: knowledge; persuasion; decision; implementation; and confirmation. The various stages involve different kinds of actors who play different roles, and help to bring the “innovation” — in this case, eating insects — to a critical mass where it advances and becomes diffused in the culture. People first become aware of the idea, then become convinced of its value, then decide on their position, then try the innovation, and, if those stages are completed successfully, they confirm and believe in the innovation themselves. The authors of the study note that, if eating insects suddenly exploded onto the Western culinary scene, it would not be the first time a novel and unusual food became popular. They cite the “global sushi boom, where eating raw fish went from peculiar to chic in only a decade and without the concentrated efforts of scientists or politicians.” They also point out the rise in popularity of unusual foods such as quinoa and kombucha as other examples of a similar trend.

The theory of diffusion of innovations states that there are five essential attributes that are needed to help an idea spread: relative advantage; compatibility; low complexity; trialability; and observability. The authors note that when it comes to “entomophagy advocacy,” some factors have been promoted above others, and in the paper they outline several key areas that have held back the diffusion of insect eating.

The first problem is availability, as “commercially available insects are difficult to find.” Even though it would be easy to assume that this is because of a lack of demand, the study cites data that suggests that when it comes to eating insects, “the reverse is true: accessibility drives demand.” Having to buy insects from bait shops or by mail order is a “significant loss of convenience.” Secondly, most consumers who are interested in eating insects will not eat those that they fear are endangered or procured by unsavory means. The study gives the example of Reese Finer Foods, a company that in the 1960s sold “small tins of roasted, chocolate covered, or “French fried” ants, grasshoppers, bees, and silkworms, in addition to “canned frog legs, smoked whale-meat, and BBQ snakemeat, as well as antelope, elephant, hippo, iguana, lion, tiger, etc., procured from zoos when an animal died naturally.” Perhaps unsurprisingly, even the consumers who were interested in the chocolate covered insects balked at their other items, and eventually the company’s market shrunk until it folded. Finally, once mass rearing and mass demand of insects as food is reached, there is the problem of convincing retailers to stock the products. The authors note that “retailers possess disproportionate influence over what is considered edible,” by what they stock on the shelves and how they present it. They say that “the sight of bags of cricket meal, bottles of termite oil, or loaves of insect flour bread, would instill in consumers the idea that these items are edible and can furthermore be worked into extant family recipes.”

You may be wondering why Faunalytics would include studies about entomophagy if its widespread adoption seems to have so many barriers in the West. Though it does seem unlikely at the moment, the rise of foods such as kombucha and quinoa shows that products considered strange or exotic by Western standards can become market favorites very quickly. For animal advocates, the issue of entomophagy in the West is an important one, even if it is only theoretical for the time being. While scientists are trying to come up with alternative ways of getting even more protein to consumers, veg advocates know (and have known for many years) that you don’t need to eat cows, pigs, chickens, or insects to get the nutrients needed to both survive and thrive. Entomophagy advocates promote the practice in TED talks, and the former Secretary General of the UN has appeared in an insect cookbook endorsing insect consumption, yet Westerners are still not eating bugs. Despite this, it would be wise for advocates to come up with strategies to advocate for a plant based, veg diet that will specifically address entomophagy. Consumers might not feel the same ethical qualms about eating insects as they might have when consuming mammals, and it would be wise for advocates to understand the various reasons why. The authors note that, if there can be a “safe and steady supply,” that the “demand will take care of itself.” If this is true, it may only be a matter of time until insect eating becomes more widespread.