This study from Belgium examines the likelihood of Western consumers to eat insects as a "meat substitute," as well as the barriers that might prevent them from doing so. Respondents were asked a series of questions related to both regular meat consumption and insect consumption, and gave their opinions on whether they would eat bugs for reasons of nutrition and sustainability, or not at all. The results of the study show that while traditional meat eaters aren't very likely to start eating mealworms as part of their diet, there is a more "adventurous" demographic that would put bugs on the table.
ABSTRACT ONLY Only an abstract of this article is available.
PEER REVIEWED This article has been peer reviewed.
Summary By: Karol Orzechowski | This is a summary of an external study | Published: January 8, 2015
Image by Flickr user velacreations, under Creative Commons License 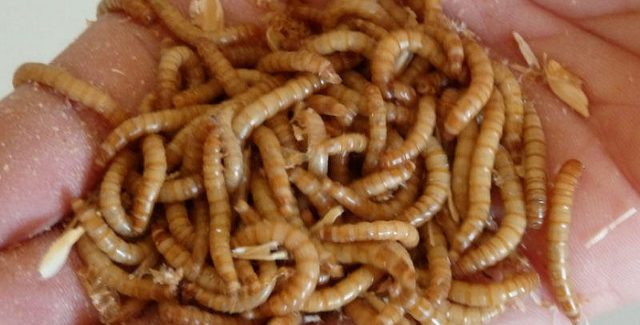 This study from Belgium examines the likelihood of Western consumers to eat insects as a “meat substitute,” as well as the barriers that might prevent them from doing so. Respondents were asked a series of questions related to both regular meat consumption and insect consumption, and gave their opinions on whether they would eat bugs for reasons of nutrition and sustainability, or not at all. The results of the study show that while traditional meat eaters aren’t very likely to start eating mealworms as part of their diet, there is a more “adventurous” demographic that would put bugs on the table.

With factory farming and related meat consumption being clearly identified as a source of environmental damage, researchers are turning their sights to potential “solutions.” One possible avenue to reduce factory farming and meat consumption is the promotion of insect-eating as an alternative protein source, which “has recently received a growing deal of attention as a promising way to cope with some of the major food and nutrition challenges facing the world,” according to several recent reports. In this study, researchers sought “to profile consumers who claim to be ready or willing to eat insects, and decided to situate their research in Flanders, Belgium, “a ‘typical’ Western society where traditional meat consumption prevails and the adoption of insects as a foodstuff is regarded with a great degree of skepticism and disgust.” Their identification of insect eating with disgust is important. Though insects are consumed as a protein source in many non-Western countries, it is still relatively taboo in the West, and research has shown that insect consumption in non-Western countries tends to drop when the population becomes more affluent and tries to “Westernize.” Still, the authors note that there is “a nucleus of some kind of market for insects or insect protein in Western countries,” noting the emergence of insect recipes in cookbooks, on cooking shows, and on restaurant menus as an indication that public opinion may be shifting somewhat.

Inclusion in the study as a respondent was based on two factors: “being involved in food purchasing (but not necessarily being the primary responsible person for food purchasing) and, being a consumer of meat.” No vegetarians/vegans were included in the study, and interestingly, the data was collected one week prior to the announcement of the authorization of ten insect species for production and human consumption by the Belgian Food Safety Authority. The respondents were asked a host of questions related to flavour, willingness to try new foods, sustainability, and how much meat they consume in general. Researchers found that, “only 3% of the sample indicated to be ‘definitely willing or ready’ to adopt insects as a foodstuff, while another 16.3% claimed to be ‘willing or ready’.” Gender and age were strong determining factors, with men being more than twice as likely to eat insects than women, and younger people being more likely to eat insects than older respondents. Perhaps unsurprisingly, “food neophobia” (an aversion to eating new foods, which was also measured during the study) was the biggest determining factor in negative responses. With this information in mind, the author notes that some “early adopters” of eating insects in the West could be seen as “trendsetters,” and the study shows that this group is primarily comprised of younger males who are open to trying novel foods and are interested in reducing the environmental impact of their food choices. “With low levels of neophobia, the likelihood that this type of person is ready to adopt insects as a meat substitute is more than 75%.” By contrast, the author notes that their numbers show that it is also “very unlikely that ‘typical’ Western meat lovers would consider including insects in their diet.”

The study concludes by noting that the results shown here are very different from other studies carried out only 2-3 years earlier. The author accounts for this by observing that “the time interval between both studies has been marked by substantial negative mass media coverage relating to animal welfare in livestock production, fraud and contamination in the meat supply chain, and the possible negative consequences of meat consumption on human health and the environment.” Indeed, the study shows that eating insects is more likely among people who have a more flexible idea of diet, and who are swayed by factory farming’s (deservedly) negative publicity. However, despite the “benefits” of eating insects as a protein source in comparison to meat, it seems that for a variety of reasons, many consumers will likely try different kinds of meat, or eat no meat at all, before they put mealworms on the menu.

Original Abstract:
This study investigates the readiness of consumers in a Western society, where traditional meat consumption prevails, to adopt insects as a substitute for meat. Using cross-sectional data (n = 368) and binary logistic regression modeling, the study identifies gender, age, familiarity, food neophobia, convenience and environmental food choice motives, as well as meat-related attitudes and future meat consumption intentions as significant predictors. The predicted likelihood of adopting insects as a substitute for meat is 12.8% [95% CI: 6.1–19.4%] for males and 6.3% [95% CI: 2.8–9.9%] for females, other predictor variables held constant at their mean value. People who claim to be familiar with the idea of eating insects have a 2.6 times higher likelihood, and consumers who intend to reduce fresh meat intake are up to 4.5 times more likely to adopt insects. Food neophobia makes the largest contribution to consumers’ readiness to adopt insects: a one-unit increase in the food neophobia score is associated with a 84% decrease in the predicted odds of being ready to adopt insects. A stronger convenience orientation in food choice and a higher interest in the environmental impact of food choice increase the likelihood of adopting insects by 75% and 71% per unit increase in these predictors’ scores, respectively. By contrast, a one-unit stronger belief that meat is nutritious and healthy, and a one-unit higher importance attached to taste for meat lower the predicted odds by 64% and 61%, respectively. This study reveals that the most likely early adopters of insects as a novel and more sustainable protein source in Western societies are younger males with a weak attachment to meat, who are more open to trying novel foods and interested in the environmental impact of their food choice.

This study identifies socio-psychological forces that drive behavioral change, and suggests ways to tailor advocacy to encourage individuals to reduce their meat consumption.