There is a high degree of variance in the level of consumer acceptance of meat that comes from mobile slaughter unit. This study tries to explain why.
ABSTRACT ONLY Only an abstract of this article is available.
PEER REVIEWED This article has been peer reviewed.
Summary By: Faunalytics | This is a summary of an external study | Published: March 28, 2017
Photo by Flickr user usdagov 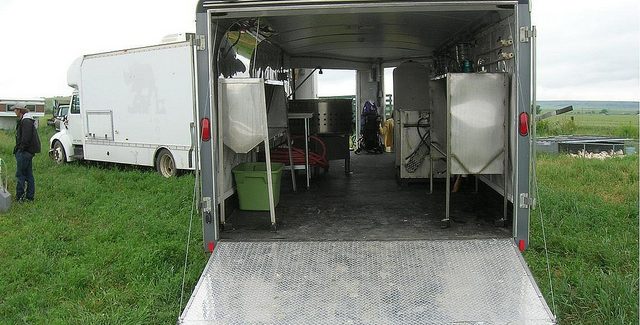 Slaughtering animals for human consumption is highly distressing to various species as they wait at the slaughterhouse. But the process actually begins when animals are taken from the farm and transported—often over long distances—to the slaughterhouse itself. Despite the road transport of animals to slaughter being common (just think back to any of the times you have seen an animal transport truck travelling along the highway), it is only in recent years the public has become more aware of the welfare issues associated with it.

Studies have shown that the transport of animals over long distances to slaughter “contributes significantly” to a reduction in animal welfare. This affects many angles from measures of animals’ stress hormones to the quality of meat. One alternative is the Mobile Slaughter Unit (or MSU). MSUs essentially bring the slaughterhouse to the farm. Using MSUs means that animals need not be transported at all. This is because the slaughtering process happens directly on the farm. MSUs are not widely used as of yet.

This study from the Netherlands aimed to gauge consumers’ willingness to pay for meat from MSUs. MSU meat is currently not available in the Netherlands. But the researchers wanted to gauge how much consumers might pay for meat from MSUs as it is crucial to making sure the process becomes more of a norm for the industry. They devised a questionnaire which tested two models: 1) the “Theory of Planned Behavior,” and 2) the “Value Belief Norm Theory.” The researchers distributed the questionnaire to more than 500 participants.

The researchers found that the two main reasons that respondents gave for buying MSU meat was the potential increase in animal welfare (63.5%) and in quality of meat (18.5%). The two main reasons that consumers would not buy MSU meat was the price (50.2%) and the doubt about whether animal welfare actually increases (20.1%). They found that women had a “slightly higher” intention to buy MSU meat. But, they found a high proportion of variance in intention. And the researchers hypothesize that this could be because “MSU meat is not available on the Dutch market and that therefore consumers might perceive MSU meat as a hypothetical product.”

The study shows that there is some strong initial desire and willingness to pay for MSU meat. But it also shows that producers in the MSU meat supply chain will need to tap into the “drivers of intentions” in their marketing strategies. To animal advocates, this will either be seen as a general positive step toward better animal welfare at slaughter or as a perpetuation of the notion of “happy meat.” How you act on this information in your own advocacy will likely depend on your position on that spectrum.