Giant pandas attract a "disproportionate" amount of conservation resources, but does this trickle down to help other species?
ABSTRACT ONLY Only an abstract of this article is available.
PEER REVIEWED This article has been peer reviewed.
Summary By: karol orzechowski | This is a summary of an external study | Published: March 4, 2016
Photo by adriensifre 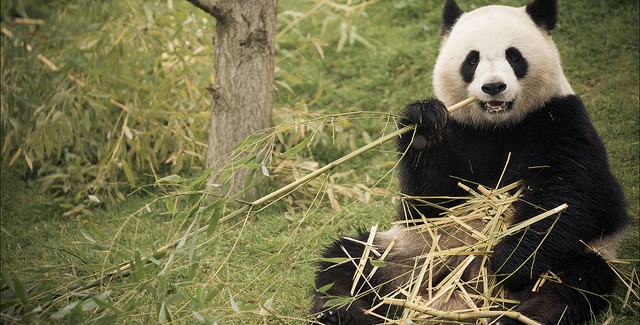 China is a large and diverse country encompassing many different types of ecosystems over a wide area. In fact, China is home to 15% of the world’s vertebrate species and 12% of all plant species. Although the environmental challenges that China faces as a developing economy are well documented, the government has “emphasized conservation of biodiversity in recent years.” Protected areas have increased 35-fold since 1980, and certain species such as the giant panda have attracted special attention as iconic and endangered. China, along with international partners, has taken up the fight for the giant panda, often devoting an “exceptional” amount of resources to that struggle. The question for researchers in this study was how these arguably disproportionate resources devoted to pandas help to protect other vertebrate species as well?

To assess the potential for this “umbrella” effect, researchers mapped the distributions of amphibians, birds, and mammals in an effort to understand how the ranges of other threatened species may overlap with protected ranges for giant pandas. Essentially, the researchers wanted to know “how well the existing national nature reserves cover these crucial regions of endemism and how one might make improvements.” Their study included diverse types of animals: 132 mammal species, 117 birds species, and 250 amphibian species. What they found was that, with the exception of one bird species, “the national nature reserves devoted for the giant panda protection include all the endemic forest species that overlap with the panda distribution.”

Overall, giant panda reserves “cover 8% of endemic center for mammals, 9% for birds, and 1% for amphibians.” Although there are certainly gaps in coverage “the giant panda serves as an umbrella species: 96% of its range overlaps with the centers for at least 1 endemic taxon.” This substantial overlap means that continuing to devote resources to giant panda habitats or to restoring forest areas to connect habitat fragments “could lead to the protection of the richest forests for endemics.” But the researchers also caution that we need to “look beyond” the giant panda if we want to address endangered species more broadly.