Scientists may be able to use camera traps to generate standardized data to monitor threatened species.
PEER REVIEWED This article has been peer reviewed.
EXTERNAL STUDY This is a summary of an external study.
Summary By: karol orzechowski | Published: March 11, 2016
Photo by Flickr user Smithsonian's National Zoo

Trying to understand the exact numbers of species is an extremely important exercise for scientists and conservationists. While there is a range of different methods that scientists can use to count species, not all of them are reliable or applicable in every context. Researchers have employed their own methods to count animals, and in some situations have even relied on citizen science to provide more robust estimates, but gathering data about animals in tropical regions has proven to be especially difficult. Because of the challenging nature of the work, there is a “data void” when it comes to measuring tropical biodiversity.

This data void poses a problem that leads scientists to instead rely on inferences. In one case, “the most comprehensive evaluation of the effectiveness of tropical forest protected areas was largely based on expert opinion and suggested that many parks were failing.” This informal approach might be sufficient in some contexts, but according to the authors of this paper, “the gravity of conservation decisions necessitates more objective evaluations using primary data and robust indicators of biodiversity change.”

To try to address this, the researchers here employed a novel and yet seemingly simple method to gather data: camera traps. Using data from camera traps set up by the Tropical Ecology Assessment and Monitoring Network (TEAM), the researchers derived a more reliable and robust range of data. The camera traps set up by TEAM are prolific: combined, they produce “approximately 500,000 images per year and sample over 3,200 square km.” They are used to “inform management of more than 61,000 square km of protected areas.”

Calling this survey “unparalleled” in terms of its accuracy and scope, the authors arrive at a mixed conclusion: “15 protected areas throughout the world’s tropical forests have not exhibited systematic declines in occupancy, richness, or evenness of terrestrial mammal and bird species despite exhibiting extensive variability in population-level occupancy trends during the last 3-8 years.” Though they are certainly not saying that declines aren’t happening, the speed and scope of those declines may not be as bad as previously thought. Indeed, the camera trap data indicate “less dire outcomes.”

The results of this study give room for cautious optimism, but we should contain our jubilance. While things may not be getting worse for the time being, neither are they necessarily getting any better. Perhaps more important than the actual results of the study, however, are the methods that produced such a robust data set. Wild animal advocates should take notice here: the number of tools at our disposal to assess wild animal populations is ever changing and expanding. We should never be content with simply using the same old methods just because we have used them before. As technology progresses, so can the tools that we use to get the data that helps our advocacy. 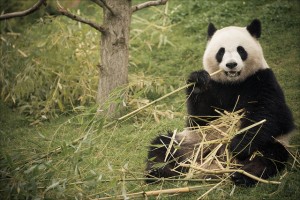