A unified electronic health recording system would be invaluable to avoid harmful drug interactions and track veterinary prescription data for our companion animals.
FULL TEXT The full text of this article is available.
PEER REVIEWED This article has been peer reviewed.
EXTERNAL STUDY This is a summary of an external study.
Summary By: Owen Rogers | Published: December 31, 2018
Photo by Lorca Wiles on Unsplash

Medical data is an extremely powerful tool that can be used to monitor health trends and ensure effective treatment. While human medical care has, over the years, adopted various unified electronic medical record systems, veterinary medicine has long lagged behind. Currently, clinical trials are the only accessible way to assess the comparative costs and benefits of various medications for companion animals. Researchers and veterinarians stand to benefit immensely from a population-wide recording system of veterinary prescriptions, and this study attempts to devise one.

Data for the study was drawn from British veterinary practices participating in the Small Animal Veterinary Surveillance Network (SAVSNET). Three species were recorded: dogs, cats, and rabbits. Each electronic health record (EHR) detailed the animal, purpose of visit, and any prescribed pharmaceutical agents (PAs). The PAs were then analyzed by the researchers to determine their family (PF), class (PC), and whether they were authorized for humans only, veterinary use only, or both (generic). This analysis was done by text-mining the list of medications and comparing them to the World Health Organization’s ATCVet reference schema.

This data from five PFs – antibiotics, antimycotics, ectoparisiticides, endoparisiticides, and endectocides – were used to determine pharmaceutical diversity (PD), which the researchers define as “the frequency and variety with which a practice prescribes pharmaceutical classes (PCs) within a determined pharmaceutical family (PFs).” For example, a veterinary practice that only prescribes a single class of antibiotics will have a low PD for that family. PD was measured on a scale from 0 to 1, with 1 being maximum diversity.

The researchers also recorded co-prescription incidence, which they defined as “prescription of two or more PAs belonging to a different PF within the same booked consultation.” That is, a co-prescription would be recorded if a dog was prescribed both an antibiotic and an anti-inflammatory in the same visit. Three groups were organized for co-prescriptions: vaccines and parisiticides (preventative), PAs focused on treating unhealthy animals, and PAs used for euthanasia.

For the 200,541 cats in the study, 69% of visits resulted in a PA prescription or administration. 81% of cats were recorded receiving at least one PA during the study period. 96% of PAs were veterinary, 3% human-only, and 1% generic. 45% of visits resulted in a co-prescription, with the most common pairing being endoparisiticides and endectocides.

Overall, dogs had the highest PD for antibiotics, with cats in the middle and rabbits the lowest. Antimycotic and ectoparisiticide PDs were roughly even for all three species. Cats had the highest PD for endectocides, followed by rabbits and then dogs. Endoparisiticide PD was highest in dogs and cats, who were roughly even. The authors further examined the antibiotic PD to determine whether it could be used as a benchmark. They found no correlation between antibiotic PD in cats or dogs and the frequency of the practice’s visits that resulted in an antibiotic prescription.

Just from this experimental study, the authors made some notable discoveries. For example, the relatively high amount of human-only PAs that were prescribed to rabbits suggests that there are less veterinary options for that species. In addition, they found that cats were prescribed endocrine PAs at a higher rate than either dogs or rabbits, suggesting that glandular disorders are more common in that species.

In general, the authors affirm that a unified electronic health recording system is invaluable to avoid harmful drug interactions and track veterinary prescription data. The more data that is available to veterinarians and researchers, the better they can do their jobs. The formation of nationwide or international veterinary databases should be a priority for the field in the near future. 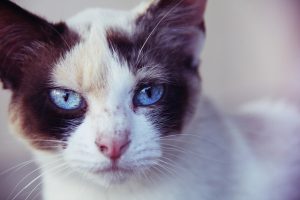