Contact from any humans - not just familiar ones - can help to reduce fear in shelter dogs.
ABSTRACT ONLY Only an abstract of this article is available.
PEER REVIEWED This article has been peer reviewed.
Summary By: karol orzechowski | This is a summary of an external study | Published: February 8, 2016
Photo by Flickr user bullcitydogs 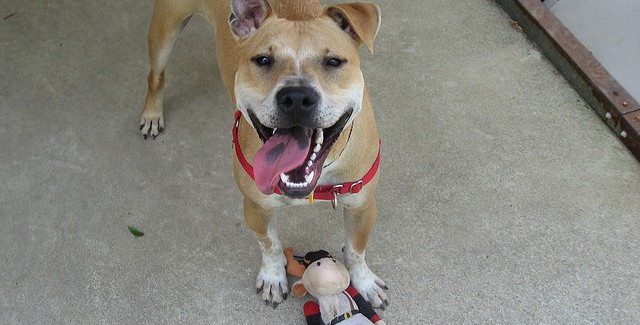 In the Australian state of Victoria, dogs and cats in shelters are required to undergo an 8-day period of quarantine where they have no physical (and often no visual) contact with other dogs or cats. During this period, however, shelter dogs are allowed to have contact with humans, as part of their various daily routines and activities. The researchers of this paper wanted to know how much the introduction of play into the shelter environment during the quarantine days may help the socialization of dogs and their ability to be re-homed.

To do this, the researchers conducted two experiments at a large dog shelter in Victoria. In the first experiment, they examined “the effects of daily human contact and the opportunity to interact with toys during the first week of housing.” In the second experiment, they looked at “whether the effects of human contact were specific to the human that provided the contact, or were generalised to other humans.” What they found was that the dogs that received positive human contact and toys increased the time they spent at the front quarter of the pen when the experimenter was very close. They also found that in a “human avoidance test,” which is used to gauge a fear response, there was some limited evidence that contact with humans and toys helped to reduce fear.

Perhaps most significantly for animal advocates, the experiment did not show any differences with respect to the “effects of familiarity” when dogs were approached. In other words, it doesn’t matter if the human providing the play contact is known or not, the effect is still positive. However, researchers note that this may not be a strong conclusion because of the tightly controlled variables in this study and that other factors may also affect dogs’ reactions. “Discrimination between people by domesticated animals is obviously easier if the animals have some distinct cues on which they can discriminate, such as size, behaviour, colour of clothing or location of handling.” 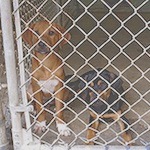 Food-Related Aggression in Shelter Dogs: A Comparison of Behavior Identified by a Behavior Evaluation in the Shelter…

Many shelters consider food aggression (FA+) a dangerous behavior and will either adopt such dogs out with restrictive conditions, or consider them not appropriate for adoption and euthanize them. A 2013 study from Boston asks us to rethink conventional wisdom. In a sample of 97 dogs studied three months after adoption, researchers found that only 55% of dogs who were food aggressive (FA+) in the shelter displayed similar behavior at home. Of the dogs that were FA+ after adoption, almost all (93%) of them displayed the behavior rarely and only 18% displayed more aggressive behavior such as lunges or bites.