Horses are one species about which U.S. citizens have conflicting practices: sometimes we love them, sometimes we use them, but we never eat them.
Author: Faunalytics | Published: October 6, 2010
Image by Pexels user Pixabay

A recent book by Hal Herzog, “Some We Love, Some We Hate, and Some We Eat,” discusses the attitudes people have toward various species of animals. In the case of some animals, however, cultural attitudes seem inconsistent. This is the case with horses in the U.S. Some of our cultural practices use horses in cruel sports that can lead to their injury or death, while other cultural practices put horses on par with dogs and cats. They are loved companion animals and they are not considered acceptable sources of meat, although in some other western countries horses are often used for meat.

It is clear that citizens in the U.S. do not support horse slaughter. While this is now less of a concern because no horse slaughter plants are currently operating in the U.S., there is also opposition to slaughtering horses to export their meat to other countries. Studies in Texas, New York, and California found that people were not only opposed to the act of horse slaughter (and supported making it an illegal practice), but they were also generally unaware that it even occurred in their state or in the the U.S. more broadly. 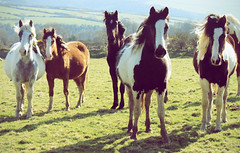 One likely reason that there is such strong opposition to the consumption of horsemeat is that horses are considered by some to be companion animals. Although only 2% of U.S. citizens with companion animals identify horses as their companions, they still have a place in our culture as companion animals. Two recent books, including “Why We Love Dogs, Eat Pigs, and Wear Cows” by Melanie Joy and the Herzog book already mentioned discuss the tendency for people to have an aversion to eating those species of animals that they know as companion animals. Given the role horses have as companions, it makes sense that they don’t end up on people’s plates, giving many animal advocates a sigh of relief.

However, when it comes to horses, animal advocates do have to combat their use as entertainment. While horse eating doesn’t occur, horse racing and rodeos and other cruel sports do exist. Few U.S. citizens attend horse races and most feel relatively uneducated about the experiences of horses used in racing, though the industry is generating revenue. The Washington Gambling Commission found that only 5% of Washington state’s citizens had gambled on horse races in 2007. The lack of participation in the activity is accompanied by an expected lack of knowledge about the industry. Faunalytic’s 2010 Animal Tracer Survey found that 66% of those surveyed felt that they were “not very” or “not at all” knowledgeable about the welfare of dogs and horses used in races.

Although horse racing is not a huge industry in the U.S. relative to other industries, it definitely is not negligible; in fact, it’s pretty big business. According to one industry blog, while the amount of money bet in horse racing is down, $3.78 billion was spent betting on horses in the U.S. in the first four months of 2010.

It seems that horses are one species about which U.S. citizens have conflicting practices: sometimes we love them, sometimes we use them, but we never eat them.

To really know what non-advocates think it is essential to ask them directly and then filter their responses through rigorous analysis.