Research shows that positive media coverage might depend less on what advocates do, rather than who they are.
ABSTRACT ONLY Only an abstract of this article is available.
PEER REVIEWED This article has been peer reviewed.
Summary By: karol orzechowski | This is a summary of an external study | Published: March 28, 2016
Photo by Flickr user shriekingtree 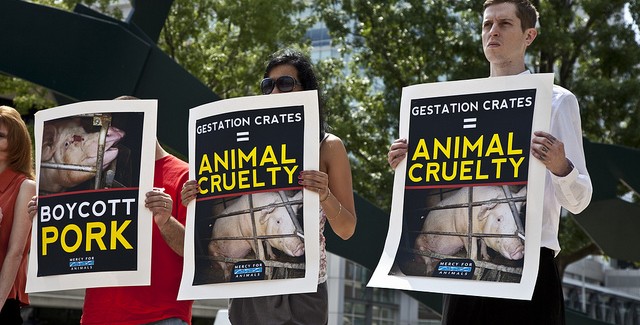 Most animal advocates are familiar with the struggle to get positive media, yet we also understand that media coverage can be crucial for getting our message out there. A well-timed action or a well-placed visual can not only garner media attention and increase public awareness, it can provide the push that some members of the public may need to support a given animal issue. Still, most advocates would agree that not all coverage is good coverage. Certain types of actions may garner coverage where the focus is “on the protest activity instead of the activists’ issues.” The measure of media coverage is one issue, but the measure of just how positive or negative that media coverage may be is another matter entirely. Is a disruptive or transgressive action worth doing if the coverage that results largely ignores the issues and is outwardly disparaging towards advocates?

This article looks at how we can use “a new measure of desirable media coverage and show that the consequences of transgressive protests may be more complicated.” The author seeks to provide a means of measuring “good” media coverage that future scholars can use and then tries to show how “the use of disruptive protest over a longer period of time may lead to at least one form of coverage that activists want.” Specifically, the author is interested in graphic imagery and actions related to it. To try to better understand these dynamics, the author looks at an “exhaustive dataset of all articles covering animal advocacy protests in the New York Times from 1960 to 1995.” The author is careful to note that, even though the data set is large, it is still limited: there are many animal advocacy actions that would not have been covered, and the scope of this research does “not try to speak to why some protests were chosen for coverage when others were not.” Instead, this project only looks at the quality of the coverage of the actions that were covered. It’s important to note here that the author associates graphic descriptions and graphic footage as being a good thing in media coverage, and such footage is a key part of the measure of “positive” coverage.

It’s interesting to note that the period of time studied by the author coincides with a period where both People for the Ethical Treatment of Animals (PETA) and the Animal Liberation Front (ALF) got a considerable amount of media attention for actions ranging from illegal lab raids to splashy street protests. At the same time, PETA was openly supportive of the ALF in the media. Related to this, the author found that “PETA and the ALF were the only two [organizations] that demonstrated a significant association with graphic description.” The analysis showed that “when articles included mentions of PETA or ALF, and when the article was disparaging to the movement or allowed more space to describe the target’s side, the coverage was more likely to include graphic descriptions of abuse.” In the author’s view, these results are “puzzling,” and the author speculates that it may simply be related to “controversial reputations and the journalist’s imperative to write a dramatic story.” The dynamic is summed up by the author in a way that is illuminating for advocates:

The author concludes that the use of disruption may not always lead to “bad” coverage and that, while controversial tactics may receive less positive coverage in the short term, “the identity that evolves may function as a device for getting some types of ‘good’ coverage.”

This issue of media coverage, and how we quantify and understand it, is clearly relevant to today’s animal advocacy movement. The movement, both in the U.S. and worldwide, appears to have grown and expanded a great deal since the date of this study. Animal advocacy seems a very different movement than it was in 1995. Still, the takeaway message of this study is not that tactics from the 90s are applicable now. Instead, the author concludes that “disruptive and controversial protest should not be denigrated nor glorified, and that the short-term and long-term effects of these tactics are more complicated than what is presented in the literature.” Future research may try to link and quantify positive media coverage to the degree to which people change their behavior rather than by simply the “graphic details of activists’ grievances” as the main measure. In the meantime, this study is a reminder for advocates not to dismiss any tactics out of hand and to instead take a broader and more long-term view.