There are many approaches to protecting endangered species that may also help people and may even be essential to mutual survival.
FULL TEXT The full text of this article is available.
Author: Faunalytics | Published: April 18, 2016
Photo by Flickr user dakiny 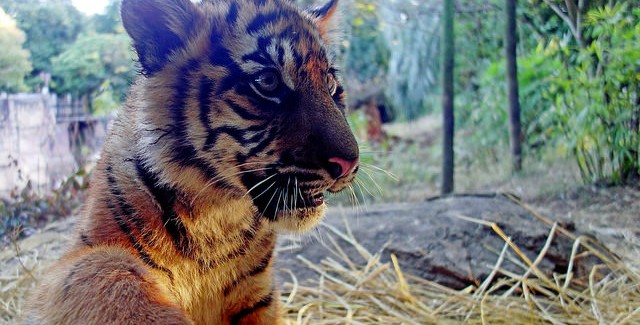 In the quest to save endangered species, there are many different players and many different motivations. Of course, all species have an intrinsic value and importance in and of themselves, but many (if not most) of the threats to wild animals are caused by human activity. Extinction of different species and our responses to those extinction events “reflect a wide range of human follies and miscalculations.” The problem is a serious one: more than 500 species have been estimated to have disappeared from North America since the 15000s. Many organizations around the world are doing what they can to help slow the extinction and it’s been noted that addressing the problem will require a huge range of responses, including “changes in human consumption patterns, reproduction, cultural attitudes, energy sources, economic expectations, and more.” These actions would greatly benefit endangered species, but would also be positive for humans. Indeed, for many people, the human benefits of reducing overpopulation or addressing resource scarcity by shifting to renewable energy greatly outweigh any benefits those actions might have for endangered species.

This paper looks at just such dynamics. The authors acknowledge that saving endangered species requires global action – “saving one species at a time is little help if its habitat is destroyed, and saving habitats is of limited help while climate change continues unchecked” (the scope of this paper is focused on the United States). While the researchers note that the role of humans in the extermination of wild animals is debatable in some cases, in other cases our impact is more obvious. They list a range of species extinctions that have been clearly related to human activity, everything from the disappearance of the dodo bird to the great auk, the Labrador duck, and the heath hen. They make a point of describing how some species such as polar bears are not only keystone species, but also more charismatic to the general public and can therefore attract conservation support. Still, “most endangered species are less charismatic but still vital to ecosystems and humans,” they say. For instance, “bees, birds, and bats” are crucial in pollination and food production processes, but still don’t garner the media attention they deserve.

Extinctions are caused by a wide variety of human activities, including deforestation, “extractive” industries, light pollution, noise pollution, and chemical pollution from industry and agriculture. Other causes include food production, the “use of body parts for decoration, display, or questionable remedies,” hunting, competition from introduced or invasive species, and climate change. As far as solutions go, the authors note that, like the problems listed above, there are many including tackling climate change, overpopulation, smuggling, poaching, and trade in wild animals, protecting habitats (“while meeting the needs of local humans”), sanctuaries, lifestyle changes, transportation, sustainable energy, and supporting nonprofits that work to save endangered species. Advocates who are well-versed in endangered species will not be surprised by this news. However, what they may find particularly useful is the section about “counter-arguments and responses” against conservation. It describes practical ways of responding to the critiques, for example, the argument that “extinction of animal species is not an important issue, compared to war, climate change, overpopulation, increasing disparities in wealth, terrorism, etc.” The authors provide the following response:

Biodiversity is valuable for its importance to food webs; possible future uses for humans, such as yet-to-be discovered medicines; and, not least, the ethical evolution of humans as we expand the circle of compassion. Too, some of the actions we take to save animals are the same ones we take to save ourselves (e.g., reduce pesticides, tackle climate change). Human health and wildlife health are interconnected. Pesticides and herbicides bioaccumulate in the ecosystem, reaching the food we eat and the water we drink. Indicator species (the proverbial canary in the coal mine) warn us of dangers that may eventually overtake ourselves.

At times, this paper seems to devalue endangered species by considering them only in the context of tradeoffs with humans, but the authors do a good job of underlining that this type of calculation was already happening, just not in support of wild animals. The recommendations here are geared towards being “congruent with steps that support human survival and well-being and are being pursued by people acting for other causes,” and that may not be a bad thing. Humans have the power to destroy entire ecosystems and cause species to go extinct, and the authors say, “one could argue that animal life (even animals in what is presently the wild) depend on humans for their survival.” If we can acknowledge that our survival and that of other species and the planet are intertwined, maybe we will start to advocate in ways that show us sharing a common plight rather than in an either/or struggle.

Eco-Friendliness And Masculinity: Is There A ‘Green-Feminine’ Stereotype?

Men’s willingness to engage in "green behaviors" may be influenced by threatening or affirming their masculinity, as well as by using "masculine" rather than "conventional" green branding.