Perceived Masculinity And Being Veg

For many people, being vegan is linked to a perception of being "less masculine" and that perception is stronger for vegans than vegetarians.
ABSTRACT ONLY Only an abstract of this article is available.
PEER REVIEWED This article has been peer reviewed.
Summary By: karol orzechowski | This is a summary of an external study | Published: March 2, 2016
Photo by Flickr user gageskidmore 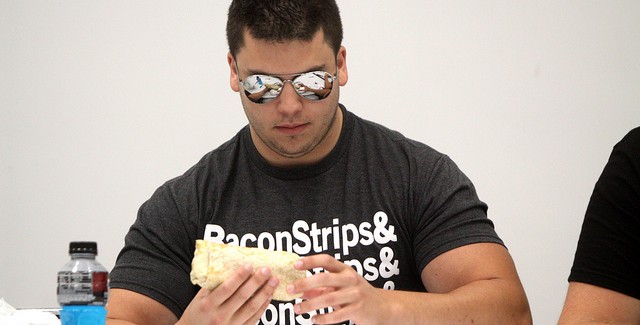 In the U.S. and many other countries, meat has long been associated with masculinity, from images of men devouring rib-eye steaks to the prevalence of phrases like “real men eat meat.” This article, published in the psychological journal Appetite, seeks to determine how such attitudes may affect peoples’ perceptions of vegans. It discusses a series of four studies that examined the influence of diet on gendered perceptions:

The author concludes that dietary preferences can affect gender perceptions and that men who eat a vegan diet may be perceived of as particularly less masculine than men who eat meat. Interestingly, the author suggests that the perceived masculinity of vegetarians is similar to that of omnivores because the vegetarian diet is becoming increasingly common in the United States. As the vegan diet gains traction, we may see a similar shift in perceptions. In the meantime, the author recommends several directions for further research including studies to help “create positive impressions of meatless diets that could induce people to eat less meat.”