The environmental consequences of our food choices are becoming more apparent as evidence emerges of animal agriculture's impact globally. This study looks specifically at the Greenhouse Gas (GHG) emissions in the production of dairy, and compares the outcome to other kinds of animal farming. The results show that, although dairy production generates less GHGs than the production of beef, it is comparable to the farming of chickens, pigs, and egg products.
FULL TEXT The full text of this article is available.
PEER REVIEWED This article has been peer reviewed.
Summary By: karol orzechowski | This is a summary of an external study | Published: May 7, 2015
Image by Flickr user m-i-k-e, under Creative Commons License

The environmental consequences of our food choices are becoming more apparent as evidence emerges of animal agriculture’s impact globally. This study looks specifically at the Greenhouse Gas (GHG) emissions in the production of dairy, and compares the outcome to other kinds of animal farming. The results show that, although dairy production generates less GHGs than the production of beef, it is comparable to the farming of chickens, pigs, and egg products.

“Appreciation of the environmental costs of food production has grown steadily in recent years,” begins a comparative study of GHG emissions across different types of animal agriculture. Many animal advocacy and environmental groups, and even the UN, have taken notice of the devastation caused by animal agriculture. However, not all of the different kinds of animal production are equally as damaging on the environment. “For example, a person may consider beef and chicken mutually interchangeable on dietary or culinary grounds,” the researchers state, “however, even if an individual estimate of the environmental cost of one item exists, it is often not accompanied by a directly comparable study of the considered alternative.” In other words, it is unclear how different kinds of animal agriculture impact on the environment. Past research results have been “often based on meager data, and addressed a single environmental metric (typically energy), thus requiring expansion, updating, and further analysis to enhance statistical robustness.” To remedy this, the researchers of this study used 2000-2010 data, having gathered information about land, irrigation water, and fertilizer from the USDA, Department of the Interior and the Department of Energy. “We used these data to calculate the amount of resources (e.g., total land or irrigated water) required for the production of all feed consumed by each edible livestock,” they say. “We then partition the resources needed for the production of these three feed classes among the five categories of edible livestock.”

The results of their calculations go a long way to clarify how the environmental impact of different kinds of animal production compare to each other. “Beef, the least efficient against all four metrics, is the second most popular animal category in the mean US diet, accounting for 7% of all consumed calories.” When it came to dairy, the “most popular category” of animal production, the researchers found that it was “not more efficient than pork, poultry, or eggs.” But, they note that “because our results reflect current US farm policies and agrotechnology, the picture can change markedly in response to changes in agricultural technology and practice, national policies, and personal choice.” The researchers also make a point of mentioning that, even though their analysis is based strictly on U.S. data, “and thus directly reflects current US practices,” because animal agriculture is globalization-driven, the “rapid diffusion of US customs, including dietary customs, into such large and burgeoning economies as those of China or India, lends a global significance to our analysis.”

For the researchers, the scope of solutions is decidedly legislative. “The caloric dominance of dairy in the US diet is tied to governmental promotion of dairy through marketing and monetary means, and meat ubiquity partly reflects governmental support for grain production, a dominant subsidy recipient in the agricultural sector.” In this, they see an opportunity for policy makers to make calculations of GHG outputs, and create legislation that would limit it to some extent. For advocates, however, the results of this study provide a much more nuanced picture of how animal agriculture impacts the environment. A large degree of animal advocacy also includes an environmental protection message, so this study can serve as a useful source of information to back up advocate messaging.

Original Abstract:
Livestock production impacts air and water quality, ocean health, and greenhouse gas (GHG) emissions on regional to global scales and it is the largest use of land globally. Quantifying the environmental impacts of the various livestock categories, mostly arising from feed production, is thus a grand challenge of sustainability science. Here, we quantify land, irrigation water, and reactive nitrogen (Nr) impacts due to feed production, and recast published full life cycle GHG emission estimates, for each of the major animalbased categories in the US diet. Our calculations reveal that the environmental costs per consumed calorie of dairy, poultry, pork, and eggs are mutually comparable (to within a factor of 2), but strikingly lower than the impacts of beef. Beef production requires 28, 11, 5, and 6 times more land, irrigation water, GHG, and Nr, respectively, than the average of the other livestock categories. Preliminary analysis of three staple plant foods shows two-to-sixfold lower land, GHG, and Nr requirements than those of the nonbeef animal-derived calories, whereas irrigation requirements are comparable. Our analysis is based on the best data currently available, but follow-up studies are necessary to improve parameter estimates and fill remaining knowledge gaps. Data imperfections notwithstanding, the key conclusion—that beef production demands about 1 order of magnitude more resources than alternative livestock categories—is robust under existing uncertainties. The study thus elucidates the multiple environmental benefits of potential, easy-toimplement dietary changes, and highlights the uniquely high resource demands of beef. 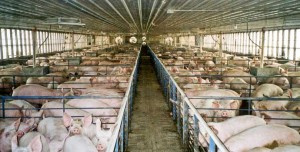 The chorus of voices against industrial animal production grows larger by the day, and this report from Food Tank is further evidence that factory farming is seen as both environmentally destructive and an ethically horrific practice. The report takes a snapshot of the scale of factory farming in 2014, and offers a number of suggestions as to how individuals and advocacy groups can respond to it. Though the overall picture may not be surprising to many animal advocates, some of the recommendations are novel and thought provoking.