How Effective Is Captive Bolt Stunning?

Despite being shot accurately, 13.6% of bulls may be inadequately stunned, leading to serious welfare concerns and questions about reliability.
ABSTRACT ONLY Only an abstract of this article is available.
EXTERNAL STUDY This is a summary of an external study.
Summary By: Lukas Jasiunas | Published: May 2, 2017
Photo by Flickr user falcon_33

Stunning animals is one of the only “welfare” measures that exists for animals at slaughter. The idea is that, through stunning, animals do not suffer during the actual killing and dying process. But how effective is captive-bolt stunning, the most common way of stunning cows? Researchers at the Swedish University of Agricultural Sciences looked into the efficiency of captive-bolt stunning at a commercial Swedish abattoir. A total of 998 cattle were observed during routine stunning over five consecutive days. The specific facility processes, on average, 200 cattle a day and 30 animals an hour. The scientists tried to evaluate the stunning procedure in terms of stunning adequacy and accuracy. Inadequacy was defined as the presence of consciousness symptoms in stunned cattle. EU laws now require the ongoing monitoring of stun quality in European abattoirs as the issue of animal protection and welfare at the time of slaughter has become a matter of public concern. Animal welfare researchers have long demanded adequate stunning of all slaughtered animals in commercial operations.

The study found that out of the 998 observed cattle, just 84.1% were adequately stunned. The remaining individuals were then subjected to either repetitive stunning or slaughter while being semi-conscious. Confirming some results of previous research, bulls displayed inadequate stunning symptoms three times more frequently than other cattle. This raises great concern for the welfare of bulls as the scientists highlight that more than half of the 445,000 cattle annually slaughtered in Sweden are male.

After closely observing the skulls of the killed animals, the researchers found that in total, 10.4% of cattle who were shot accurately were inadequately stunned. Whereas when stunned inaccurately, 35% of the cattle showed signs of inadequate stunning. Remarkably, 14 bulls were shot more than three times and one was shot five times prior to slaughter. Calves were exposed most frequently to inaccurate shots (14%). The researchers deemed that poor servicing of stun guns and limited shooter experience were to blame for the inadequate stunning of cattle. In terms of the latter, the percentage of inaccurately-shot cattle ranged from five to 19 in the case of most and least experienced shooters, respectively. The scientists noted that “The least experienced shooter … seemed fearful of the cattle, often hesitating just before shooting.”

Before the new EU regulations came into effect in 2013 and rendered the previous local requirements inactive, the long-standing demand for shorter than 60 second stunning-to-sticking intervals was replaced by a lenient recommendation to keep this time as short as possible. Sticking here refers to the action of killing the cattle and draining their blood with knives. The short interval between the two steps lowers the risk of the animals regaining partial or full consciousness before reaching the sticking station. Out of the 585 bulls and 413 other cattle, none were stuck within 60 seconds. The average stun-to-stick time was 105 seconds. The researchers observed that technical design flaws (e.g. poor shackle line design) in the abattoir were the main causes for delays.

The study concludes by highlighting the importance of frequent external stun quality audit which should provide further quality control and ensure higher animal welfare standards at abattoirs. Animal advocates can use this information to help highlight the need for higher welfare standards for farm animals, both on the farm and at the slaughterhouse. The obvious limitations of the common captive-bolt stunning method should be brought to light by underlining the individual victims of the practice: the bulls, calves, and cows who are stunned inadequately prior to being slaughtered. 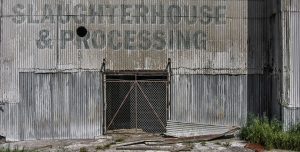 An Overview Of Cow Behavior At The Slaughterhouse

Concrete data on how cows react to slaughter procedures with implications for animal welfare, slaughterhouse design, and advocacy.