A study looking at the prevalence, clinical signs, and potential causes of congenital vestibular disease (CVD) in captive Sumatran tigers, and its implications for keeping the species from going extinct.
ABSTRACT ONLY Only an abstract of this article is available.
PEER REVIEWED This article has been peer reviewed.
EXTERNAL STUDY This is a summary of an external study.
Summary By: Faunalytics | Published: July 9, 2018
Photo by Jack Merlin on Unsplash

Currently, Sumatran tigers are listed as critically endangered species: there are only about 300 to 500 of them living in the wild. To ensure that the species is conserved, captive tigers are managed under the Global Species Management Plan (GSMP). Because of the limited number of captive tigers (about 375), however, the genetic diversity of this species is an ongoing issue.

The aim of the present study was to investigate congenital vestibular disease (CVD) in captive Sumatran tigers. Cases of this disorder have been previously observed in the species, but the existing information is not comprehensive.

The focus for this study was on tiger cubs from zoos in the Australasian region. The researchers received retrospective medical and husbandry records including video surveillance of 50 Sumatran tigers from 11 zoos. They used this information to determine which tigers were affected by CVD, what clinical signs they displayed, when the clinical signs appeared and how long they lasted.

Based on these records, the researchers classified 14 tiger cubs as affected by CVD. Affected tiger cubs displayed at least two symptoms that are common for CVD, such as head tilting, ataxia or apparent disorientation. However, the clinical signs varied among tiger cubs.  In addition, not all tigers displayed clinical signs persistently, but only episodically. This made classifying some tigers as affected by CVD more difficult.

Another difficulty the researchers faced was the direct comparison between tigers since the amount and completeness of information and the diagnostic approach varied among tigers and zoos.

Despite these difficulties, the researchers found that there was a lot of variability in the onset and the duration of the disorder. Overall, the clinical signs were observed between birth and two years of age; they persisted for a median of 237 days and disappeared by two years of age.

In addition to reviewing medical records, the researchers also conducted pedigree analyses and segregation analyses. They did this to examine the relationships between the affected tiger cubs as well as to determine the likely genotype of each tiger.

The results of these analyses revealed that all tigers affected by CVD are closely related to each other. This suggests a genetic cause for the disorder. In addition, the researchers indicate that an autosomal dominant mode of inheritance is likely. However, the results should not be considered as conclusive, since there were too few animals for a robust analysis.

These findings have implications for the planning future breeding of Sumatran tigers. The segregation analysis revealed potential carriers of the disorder which might be avoided in future breeding plans. However, because of the small population size, it is important for the species to preserve its genetic diversity. Removing certain tigers from the breeding plan due to this disease would put a lot of strain on the gene pool, and the potential survival of the species as a whole. This might not be necessary since all tiger cubs affected by the disorder survived into adulthood. The disorder might, however, affect and negatively impact tigers living in the wild. To reach valid conclusions about future conservation policies, the researchers suggest that more information about the worldwide prevalence and status of CVD is needed. 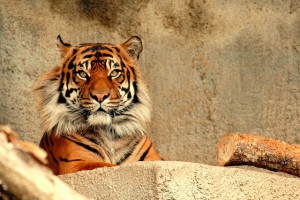 The relationship between tigers and humans in Bangladesh is a complex web of conservation, carnivore predation, and other factors.