This study observed 38 tigers in seven zoos in France to determine whether enclosure size correlated with problematic "stereotypy" pacing.
ABSTRACT ONLY Only an abstract of this article is available.
PEER REVIEWED This article has been peer reviewed.
Summary By: Faunalytics | This is a summary of an external study | Published: May 2, 2014
Image by Pixabay user Pexels

This study observed the pacing behaviors of 38 tigers in seven zoos in France. Data was analyzed to determine how enclosure size correlated with problematic “stereotypy” pacing, and whether distances covered in non-pacing movement correlated with distances covered daily by tigers living in the wild. Time of day, gender, age, and other factors were also analyzed. Problematic pacing was greatly reduced with larger enclosure sizes. The authors encourage zoo managers to make more appropriate provisions for tigers’ biological need for movement.

“In the wild, tigers live in large individual territories ranging from 7 to 1000 km2 depending on the region and prey abundance. However, in captivity, the animal’s environment is strongly reduced, and the size of the enclosure provided varies between zoos. It has been shown that animals occupying large territories in the wild, like tigers, are more vulnerable to problems of stress in captivity. Movement in captive cats has not been the subject of extensive studies, and the aim of this one was to determine the impact of the size of the enclosure on the movement of 38 captive tigers. This study shows a positive correlation between the size of the enclosure and the total distance covered by the animals and also that males covered greater distances than females. Moreover, the analysis also revealed that pacing, a form of stereotypy, has the potential to develop from the time the animals are old enough to disperse, and that this abnormal behaviour was negatively correlated with the size of the enclosure. Finally, an index, calculated with distances covered and paced, was created and can become a good tool for zoos that want to quantify and reduce abnormal pacing performed by their animals.” 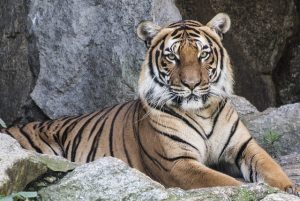 This study from India looks at the housing of captive tigers at Nandankanan Zoological Park. It sought to evaluate the tigers' welfare conditions by recording measurements of their stereotypical behaviors, such as pacing and repetitive circling. The researchers looked at how 19 captive tigers spent their time living in the zoo, specifically seeing when circling and pacing was most pronounced, and evaluating their findings. The study shows that, even in habitats which are considered "enriched" or made to seem more naturalistic, tigers still exhibit sterotypies that indicate they are living in poor welfare conditions.