Chickens display a variety of distress behaviors during different kinds of stunning. Is it possible that no method is truly "humane?"
ABSTRACT ONLY Only an abstract of this article is available.
PEER REVIEWED This article has been peer reviewed.
Summary By: karol orzechowski | This is a summary of an external study | Published: January 8, 2016
Photo by Flickr user usdagov 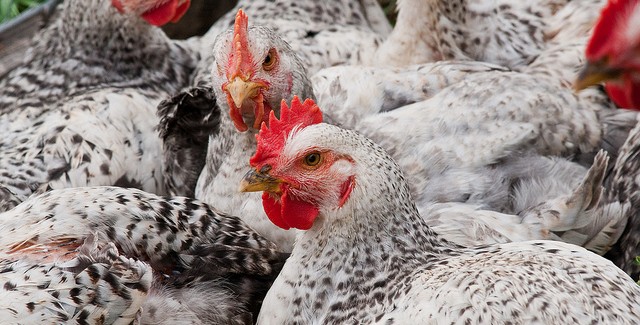 Trying to find a way to slaughter animals “humanely” is a contentious subject among animal advocates: while some acknowledge that it is important to find ways to alleviate or reduce suffering at all points of an animal’s life, others think terms like “humane slaughter” are impossibly contradictory. That being said, for the billions of animals slaughtered for food every year, stunning animals prior to slaughter is vital to ensure a less painful death.

For example, in the United Kingdom about 17.8 million broiler chickens are slaughtered every week. For these birds, the two methods most often used are electrical stunning and controlled atmospheric stunning (CAS). While electrical stunning has long been a standard in the industry, CAS has grown in popularity as it is generally considered to be more humane. However, even though birds are not shackled as they are stunned, and CAS generally has a higher success rate, it generally takes a longer time, which may increase pain and suffering. Another alternative, the Low Atmosphere Pressure System (LAPS), uses decompression of air rather than a noxious gas to kill chickens.

This study looks at pre-slaughter stunning in the UK, with emphasis on LAPS, to “focus on behaviour occurring during induction to unconsciousness” and to find out how bird weight and other factors may have an effect on stunning and how CAS differs from LAPS. The overall aim was to “create a timeline of behavioural events during LAPS and interpret this with regards to its welfare implications and EU legal requirements for animals to be spared any avoidable pain, distress or suffering during their killing and related operations.”

First, the researchers found that observation is difficult when it comes to evaluating stunning methods. Observing birds individually in a LAPS or CAS chamber made observation easier, while putting them in a “commercially relevant” sized group “made observations difficult and the resulting data less accurate.” As far as could be observed, and by a range of physical indicators, they found that LAPS is similar to CAS in many of the negative physical effects it produces, except that the process takes longer.

It’s important to note, even though the study suggests that “LAPS is a humane method for stunning poultry,” the method has serious critics in animal advocacy, and if the researchers here admit that it is a more prolonged method of stunning, CAS may be a better option based on time alone. 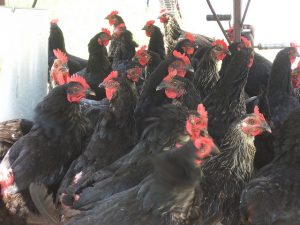