Adults age 65+ require more protein than younger consumers. This study explores meat consumption patterns and preferences for animal vs. plant-based protein among older adults in Europe.
FULL TEXT The full text of this article is available.
PEER REVIEWED This article has been peer reviewed.
EXTERNAL STUDY This is a summary of an external study.
Summary By: Casey Bond | Original Study By: Grasso, A.C., Hung, Y., et al. (2021) | Published: April 4, 2022
Photo by CDC on Unsplash

The population of adults aged 65 and older in Europe is growing. Older adults require higher amounts of protein in their diet to support their physical health and quality of life, which makes this group an important, but often overlooked, target for veg*n and plant-based advocacy.

Research suggests that older adults aren’t eating as much protein as they should. Nevertheless, animal protein makes up 60% of overall protein intake in the E.U., and the average E.U. consumer eats 49% more animal-based meat than the EAT-Lancet recommendations. Because conventional meat is harmful to animals, health, and the environment, consumers are often encouraged to reduce their meat intake or switch to plant-based alternatives. This presents a challenge for animal advocates: How can we encourage the older population to embrace plant-based proteins while still meeting their daily protein requirements?

To explore meat consumption and protein preferences among older adults, a team of researchers surveyed 2,500 consumers aged 65 and older living independently in Finland, Spain, Poland, the Netherlands, and the United Kingdom. The researchers understood that a variety of factors determine food choices, from biology and lifestyle to attitudes, culture, and one’s environment. They also understood that older adults are a diverse group with unique preferences and needs. As such, the survey addressed the following factors:

In general, the survey shows that most E.U. adults aged 65 and older consume meat. Specifically, only .1% of their respondents identified as vegan, while 14% identified as flexitarian. Among the meat eaters, 17% ate cooked meat 5 days per week, while 5% ate cooked meat every day. Accessibility was an important driving factor for making food choices. For example, travel time to get to a market or grocery store was a stronger predictor of food preferences than the time it took to cook a certain type of food.

High Meat Consumers (27% of respondents)
These were largely older adults from the Netherlands, with slightly more men than women. People in the high meat category reported the highest consumption of cooked meat, eggs, processed meat, and cheese. Their food choices were strongly influenced by things like taste and familiarity. They were generally driven to eat meat because they grew up with it, they believe it’s important for health, and because the people in their household prefer it. Perhaps unsurprisingly, this group had the smallest number of adults following a meat-restrictive diet.

Medium Meat Consumers (52% of respondents)
This group showed the strongest liking for meat but ate less of it than the high meat consumers. More adults in this group came from Poland, and they were more likely to report an unstable financial situation. Like the high meat consumers, this group had slightly more men than women and generally preferred meat because of its taste, beliefs about its health benefits, and because those in their household prefer it.

Light Meat Consumers (21% of respondents)
This group was largely made up of older women living alone and doing their own shopping and cooking. Like the high meat consumption group, light meat consumers were predominantly made up of people from the Netherlands, which the authors attribute to the success of plant-based advocacy in Western Europe. People in this group were more likely to be fussy eaters with low appetites. They valued animal welfare, and they placed a higher emphasis on health and the environment when choosing their protein. They also had the highest number of adults following a meat-restrictive diet such as veg*nism or flexitarianism, and they reported eating the highest amounts of plant-based meat alternatives.

As the world reckons with an aging population and a rise in meat consumption, catering to adults in older age brackets will only become more important in veg*n advocacy campaigns. The results of this study suggest that advocates must consider the unique health and social needs of older adults. For example, this demographic requires more protein in general and has different accessibility needs than their younger counterparts, which may create barriers to plant-based meat consumption. When it comes to campaign content, the authors recommend using animal welfare, health, and environmental messaging to reach medium and light meat consumers. Meanwhile, high meat consumers would likely be more influenced by messaging that addresses familiarity, taste, and sensory appeal.

A growing number of people endorse the benefits associated with adopting a meat-free diet — at least privately. This study explores why people may keep their plant-based cards close to their chests. 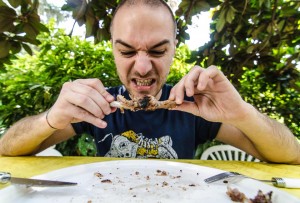 Meat and Masculinity Among Young Chinese, Turkish and Dutch Adults in the Netherlands

If we want to change the culture around meat-eating, we need to recognize that there are many ingrained traditions in play at once. Various aspects of different cultures reinforce the practice of eating meat and, as many studies show, advocating for reduced meat consumption doesn't have a "one-size fits all" solution. This study looks at the multi-cultural context of the Netherlands, and explores how different cultures in the country perceive meat-eating and masculinity. The research finds a range of diverse factors that affect how much meat a given group eats, from their own cultural traditions, to the influence of more "Western" values.

Pledging can be an effective strategy to encourage behavior change. Researchers used a smartphone app to explore whether pledges can help consumers lower their meat intake in the short term.