Conservation And ‘Placeholder’ Species: A Case Study With Coyotes

With an approach similar to "Trap, Neuter, Release" programs, the introduction of "placeholder" species can reduce hybrids and preserve endangered carnivores.
ABSTRACT ONLY Only an abstract of this article is available.
PEER REVIEWED This article has been peer reviewed.
Summary By: Faunalytics | This is a summary of an external study | Published: June 24, 2016
Photo by Flickr user tomascaspers 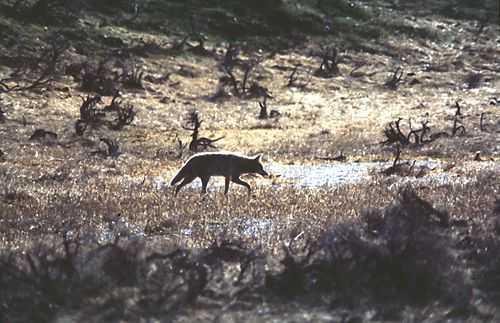 Among conservationists, preserving wild carnivore species is a subject of great concern. The variety of articles in the Faunalytics library shows the complex dynamics of carnivore conservation. Many carnivore species have declined, with one particular threat being “genetic introgression.” Introgression is essentially hybridization with species that share the same area. Unfortunately, this dilutes the gene pool and “could threaten the genetic integrity” of a species. For example, in 1987 four pairs of red wolves were released in the Alligator River National Wildlife Refuge (ARNWR) in eastern North Carolina. By 1993 the wolves had successfully bred and reestablished themselves. However, in the early 1990s, coyotes were documented in the same range as the wolves. Before too long, hybridization was occurring regularly.

One potential solution to “genetic introgression” is the use of “placeholder” animals to stop hybridization. Similar to Trap/Neuter/Release programs for free-roaming cats, coyotes or hybrids are trapped, sterilized, and released. Those sterilized coyotes and hybrids are “allowed to remain on the landscape, maintaining social bonds and territories.” Those sterilized coyotes act as “placeholders” and prevent the overall trend of introgression. This study looked at the placeholder concept in the Red Wolf Recovery Experimental Population Area (RWREPA) in eastern North Carolina, using data from 1999-2013. The program’s overall goal was “the reduction and eventual elimination of genetic introgression from coyotes into the red wolf population.” To evaluate this, the researchers looked at various factors:

(1) the number of animals (coyotes and hybrids) that were sterilized and released as placeholders, (2) the likelihood of a placeholder being displaced by a red wolf and the biotic and abiotic factors influencing these displacements, (3) the degree of territory fidelity of placeholders (i.e., the likelihood of dispersing after being sterilized), (4) survival rates and causes of mortality of both placeholders and red wolves, and (5) the number of hybrid litters born per year in the recovery area.

All of the “capture, handling, aerial telemetry, and monitoring” of red wolves, coyotes, and hybrids was conducted by personnel with the US Fish and Wildlife Service, while the study authors sifted through the data.

The goals of the placeholder program were two-fold. First, the intent was to limit intact red wolves from producing offspring by mating with coyotes (hybridization). Second, to keep space available for red wolves “without the threat of producing hybrid offspring if pairing with a red wolf occurred.” The data showed that, from 1999-2013, 37% of the 182 placeholder coyotes were “naturally displaced or artificially removed, leading to occupancy of the territory by a red wolf.” They also found that red wolves were sometimes displaced by other red wolves. While only 37% of the placeholder coyotes were naturally or artificially displaced, the remaining 63% protected space. In those protected spaces, no hybrid litters could be produced.

The results of this study represent the first evaluation of the placeholder concept used to protect another species, with some evidence of success. The researchers’ conclusions are straightforward: “The utility and application of the placeholder concept may be practical for limiting genetic introgression in similar situations.” However, wild animal advocates will see that this approach could be worth considering. That said, this type of conservation cannot be implemented only by advocates. Cooperation from government and conservation agencies will be needed to actually apply the placeholder concept to other situations. This study seems to present a strong case for them to do so.