Genetic Diversity And Conservation: A Case Study With Leopards

This study argues that conservation needs to be informed by genetic research to avoid unintentionally compromising the "natural spatial genetic structure" of species.
ABSTRACT ONLY Only an abstract of this article is available.
PEER REVIEWED This article has been peer reviewed.
Summary By: Faunalytics | This is a summary of an external study | Published: April 28, 2016
Photo by Flickr user garymacfadyen 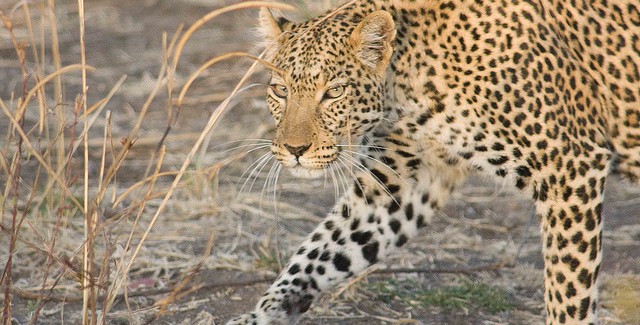 Leopards are a mobile, solitary and extremely adaptable species, and yet leopards have a long history of conflict with humans. In southern Africa, the majority of conflicts relate to leopards preying on farmed animals coupled with the spread of agricultural lands. Because of this tension, some consider leopards to be pests and even subject to culls. In other areas, they are also hunted for trophies. All of these pressures combined puts leopards on the IUCN Red List as a “near threatened” species. Still, “Relatively little is known about leopard behaviour, ecology and genetics at local and regional scales,” which makes developing conservation policies difficult.

What’s more, because of their “pest status,” leopard conservation is contentious. While the typical strategy is to extirpate, or force them out of certain areas, this can affect other species (since leopards are a top predator) and/or have a potentially damaging effect on the leopard’s genetic diversity. Researchers note that, while the removal of problem leopards may seem effective at first, “translocating individuals may, if not effectively researched and implemented, simply relocate the problem.” They continue: “Leopards are known to return to home territories following translocation, travelling up to 500 km, and continue to predate livestock, sometimes in greater numbers, upon their return.”

This study concerns itself primarily with the genetic structure of the leopard population and how current farmed animal protection strategies may have a terrible impact on leopard genetic diversity. They note, “At the continental scale, the leopard population in southern Africa comprises a single continuous population structured as distinct geographically isolated groups of individuals that display genetic variation across the species’ range.” This situation, they say, is probably already the result of “local extirpations and habitat destruction.” Further, they note that there are no guidelines for maintaining the natural genetic structure of leopards, so it’s difficult to study the situation as it may continue to deteriorate.

Motivated by their plight, the researchers here set out to “use mitochondrial and microsatellite markers” to map leopard genetic diversity and to “estimate a maximum translocation distance for leopard in the Eastern and Western Cape provinces of South Africa.” What they found through their study was that translocation is “best avoided.” Also, since there is such a paucity of data on the subject, “it will be wiser to avoid disturbing the natural spatial genetic structure than to perform translocations oblivious to the potential consequences.” For wildlife advocates, the study highlights the importance of understanding not only the human-animal dynamics of species conservation, but also how protection strategies may impact genetics.