The One Health framework looks at the dynamic between companion animals and their guardians, with the hope of leveraging their relationships to mitigate shared health risk.
FULL TEXT The full text of this article is available.
PEER REVIEWED This article has been peer reviewed.
EXTERNAL STUDY This is a summary of an external study.
Summary By: karol orzechowski | Published: December 18, 2018
Photo by Anton Darius | @theSollers on Unsplash

For those of us who live with companion animals, we know just how intertwined our lives can be. In addition to sharing space, people and their companion animals often share a generally similar lifestyle and environment, which can come with a broad range of implications when it comes to health and well-being.

In this study, researchers wanted to better understand the companion animal and human dynamic, with the hope of “leveraging this intimate relationship to mitigate shared [health] risk.” To do so, they sought to review current data for both humans and companion animals, through the lens of the “One Health” framework. In short, the One Health perspective “encourages co-ordinated and collaborative action by human and veterinary healthcare professionals” to address health problems common to both. The study involved an extensive literature review, and analysis of data through the One Health lens. Specifically, this study looked at the dynamic between overweight and obesity, and associated problems such as diabetes and cancer.

The study uncovered a wealth of health information on humans, dogs, and cats. For dogs, the prevalence of overweight and obesity has been estimated to range between 20–59%, while for cats the range is 12–52%. It’s also worth noting that those numbers have been growing: a broad review of U.S. vets from 2007 to 2011, found that overweight and obesity increased by 37% in dogs and 90% in cats, mirroring a trend among people. Between 2011 and 2014, 36.5% of human adults were obese, and he rate was higher in the older population, as it is with dogs and cats.

From an extensive discussion of obesity, the researchers then move to a discussion of how obesity could relate to diabetes and cancer in each species. Though virtually all diabetic dogs have type 1 diabetes, while over 80% of cats with diabetes have type 2. Like cats, most humans with diabetes have type 2, and the causes and risk factors associated with it are similar. When it comes to cancer, the picture is much more complicated in all species, though when it comes to a comparison with humans, dogs share more in common than cats do.

For companion animal advocates, the study presents a wealth of information that could be useful in helping to push for healthier cats and dogs, as well as healthier people. Of course, advocates will want to be careful with such topics: groups such as PETA have faced considerable (and often justified) criticism in the past for fat shaming and fat phobia. For their part, the authors note that “there is no ‘right’ or ‘optimal’ solution for every family or every community.”

Instead, they hope that the One Health perspective can gain traction, and help to encourage innovative and novel approaches “by bringing together engaged groups of people” to take meaningful steps for their health and that of their companions. Of course, even a framework that sounds as promising as this needs data. “Cross-species data will be critical,” the authors note, but so far such data are sparse. To make something like the One Health framework start to gain steam, veterinarians and human health care professionals will need to start working together towards harmonized data gathering and cross-tabulation, even if only at a broad, basic level. 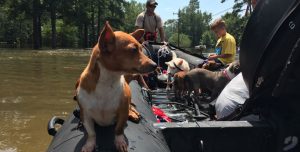