According to much research, violence toward animals is often tied to violence toward humans and abusive children may become abusive adults.
Author: Faunalytics | Published: October 13, 2010
Image by Pixabay user GoranH

At the end of this summer a video of a 12-year-old girl in Bosnia throwing puppies to their intended death made headlines (thankfully, 5 of the 6 puppies lived through the ordeal). As the story continued to gain attention, many discussions have focused on the fact that the child’s abuse of animals may indicate a propensity to be violent toward humans. According to much research, these assertions are correct —- violence toward animals is often tied to violence toward humans. 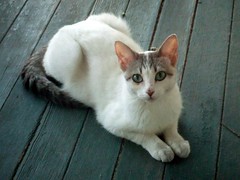 Not only is animal abuse related to adulthood violence, homes with domestic abuse often have animal abuse as well and abusive men may abuse animals to control their partners and children. The American Humane Association report finds that animals were abused in 88% of homes where physical child abuse was present. Other studies have resulted in similar findings. A study by Utah State University found that 85% of women and 63% of children who seek shelter from abuse also mention abuses of companion animals.

Carol Adams has investigated sexual violence in families and the links between human victims, namely women and children, and animal victims. [1] She finds that the abuse that animals face in households is often a means for abusers to maintain control over victims; abusers often threatened to kill or actually killed animals, most often companion animals, to get victims to comply. Further, according to Adams, a tactic commonly used by abusers to get children to remain silent about sexual abuse is to tell them that their companion animal will be killed if they tell about the abuse. Unfortunately, using animal abuse as a means to threaten or control victims is not uncommon. According to the American Humane Association report, 71% of abused women seeking shelter at a safe house noted that their partner had threatened, hurt, or killed their companion animals.

The notion that animal abuse is tied to domestic violence and violent crimes should be used as an indicator that a person has the capacity to hurt people. This has been discussed at length in response to the case of the puppies being thrown by the girl in Bosnia. What is less often discussed is that it also suggests that when individuals are found to be violent there may be companion animals in danger. There should be investigation into the well-being of any companion animals they may have in their homes since this is an important issue for the protection of animals. The above-mentioned OSPCA study found that 61% of women coming into a domestic abuse shelter indicated that their partners had brutalized or killed a companion animal. It would be ideal if this research resulted in new standards where investigations of domestic violence or violent crimes also include the welfare of companion animals in the perpetrator’s household.