This study looks at how people may view their companion animals as more or less human-like depending on their own sociality.
ABSTRACT ONLY Only an abstract of this article is available.
PEER REVIEWED This article has been peer reviewed.
Summary By: Linda Tyler | This is a summary of an external study | Published: October 6, 2017
Photo by Flickr user robertotaddeo

Psychology researchers have recently paid more and more attention to the phenomenon of perceiving human-like qualities in animals and attributing human mental capabilities to them. When it comes to humans and their animal companions, researchers have found considerable individual differences. In searching for reasons for those differences, previous studies have found that people who are lonely or “chronically socially disconnected” tend to attribute more human-like qualities to their pets and consider the animals more socially supportive.

These previous studies associating social disconnection with anthropomorphic perceptions used only college student as participants. This study from the United Kingdom set out to test this link in a stable community-based population of householders (261 people, 30-90+ years of age).

Lead researcher Elizabeth Paul and her team gathered data on each participant’s household situation (number of adults and children currently living there), grown-up children, and social connections outside the home (work, clubs, etc.). They administered the “Interpersonal Worry and Dependency” measure to gauge participants’ social sensitivity. To assess their attitudes toward companion animals, they measured their attachment to their companion animals and their perceptions about the animals’ emotions, capabilities, and degree of social support.

Some of the results confirmed the researchers’ hypotheses: e.g., that those living alone and without work to go to depended more heavily on their animal companions for social support. Similarly, those with higher interpersonal sensitivity scores were more likely to believe that animals can experience both primary and secondary emotions. Indeed, higher interpersonal sensitivity scores were associated with a tendency to attribute more negative emotions to the animals as well.

Pet attachment levels were significantly higher among those who had offspring who were now 16 years or older compared with people with under-16-year-olds in the home. Pet attachment was also very high for widowed and single adults as well as adults living with non-partner adults.

Age and sex appeared to have little impact in and of themselves on participants’ attachments to their animal companions, perceptions of companion animals’ human-like qualities, and levels of social support.

The researchers note that anthropomorphic thinking has traditionally been seen by biologists as a misleading and dysfunctional process of misattribution driven by the human “social brain.” This research and related studies may prompt a re-thinking of this viewpoint and focus more on the well-being of the humans and the behavior and welfare of the animals. 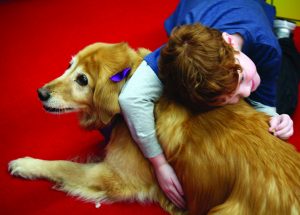 The Deep Bond Between Companion Animals And Children