Caught in the Gears: The Dangers of Slaughterhouse Work

Abattoir workers, often immigrants and other marginalized people, face a host of difficulties that can make their jobs difficult... and sometimes deadly.
FULL TEXT The full text of this article is available.
Summary By: Karol Orzechowski | This is a summary of an external study | Published: June 29, 2015
Photo by Flickr user usdagov 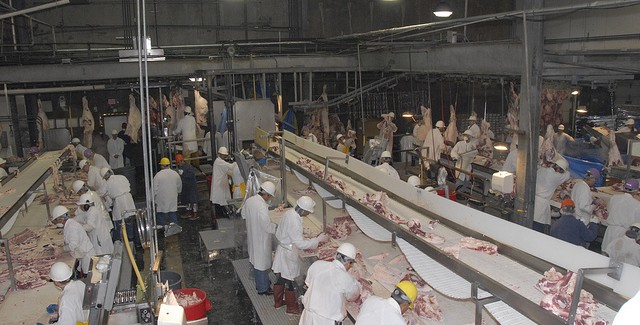 Slaughterhouses are the end of the line for billions of farmed animals all over the world. For slaughterhouse workers, the job is, at best, physically taxing, and, at worst, deadly.

This study from Human Rights Watch (HRW) focuses primarily on the human experience of slaughterhouses rather than that of animals. In summary, slaughterhouse workers are often marginalized people (on multiple levels) and working in a slaughterhouse is some of the dirtiest and most dangerous work out there. This publication, Blood, Sweat, and Fear, is a broad audit of slaughterhouses from 2004 and contains information that is still very much applicable over a decade later. The report pulls no punches. While it doesn’t lay the blame at any one company or industry player, it does state unequivocally that “the United States is failing to meet its obligations under international human rights standards to protect the human rights of meat and poultry industry workers.” What does this mean? Simply put:

Health and safety laws and regulations fail to address critical hazards in the meat and poultry industry. Laws and agencies that are supposed to protect workers’ freedom of association are instead manipulated by employers to frustrate worker organizing. Federal laws and policies on immigrant workers are a mass of contradictions and incentives to violate their rights.

The audit is especially damning when it comes to workplace health and safety. It notes many ways that workplace injuries and deaths are “predictable and preventable,” and also makes a point of saying that the industry has shown “little inclination” to take initiative to make changes within the industry. Of course, why would the industry care? The “massive” reliance on immigrant labor means that “a growing number of workers are unaware of their workplace rights. […] Because many of the workers are undocumented or have family members who are undocumented, fear of drawing attention to their immigration status prevents workers from seeking protection for their rights as workers from government authorities.”

The report makes a host of recommendations to actors at all levels: congress, state legislators, companies, and on down the line. The suggestions, like the report itself, are geared towards ameliorating the situation in slaughterhouses for humans. While one of the key recommendations is slowing the kill line so that workers can take greater safety precautions while doing their jobs, there is no mention of how any of these recommendations affect animals. The slaughter of animals is taken as a given, and HRW concentrates on human outcomes. For advocates, it may be a frustrating read, and will continually provoke the animal question. That said, the information contained herein is exhaustive and thorough. Any advocate campaigning on behalf of farmed animals will find a host of useful statistics, and will likely learn a great deal about the incredibly dangerous nature of slaughterhouse work in the process.

Information like this has been coming into the public domain from sources such as Eric Schlosser’s Fast Food Nation for a few years. Advocates around the world have carried out different kinds of slaughterhouse worker outreach, including groups like Toronto Pig Save, whose advocates routinely interact with slaughter truck drivers and abattoir employees to ask them about their job and the challenges they face. This work has been done in recognition that oppression of these workers and the oppression of animals on the slaughter line are linked. The terrible treatment slaughter workers face at the hands of giant meat conglomerates is on a continuum with the treatment of the animals. For advocates, these types of resources can be of endless value – they allow us to see that the exploitation of animals is beyond simple “personal choice,” but is systematized by an industry that doesn’t particularly care about people either.