Acoustic monitoring may be a cost-effective and efficient way to quickly and accurately measure bird colony sizes for some species.
FULL TEXT The full text of this article is available.
PEER REVIEWED This article has been peer reviewed.
Summary By: Faunalytics | This is a summary of an external study | Published: January 10, 2017
Photo by Flickr user [email protected] 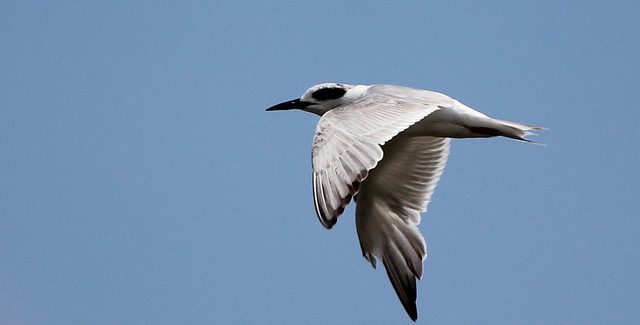 Resources for animal-related conservation programs are often scarce. Many people advocate for adaptive management (conservation that responds to active monitoring), but deciding where to allocate resources is a delicate balance. Monitoring can be expensive, decreasing the resources available for direct conservation. A lack of monitoring can lead to less rigorous and reliable data. It’s a difficult position for conservationists who look for cost-effective and reliable ways to measure changes in species populations. To this end, some recent studies have used acoustic sensors to monitor wild animal populations.

This study looked at the suitability of using acoustic monitoring for colonial seabirds, in particular Forster’s terns. The authors measured call rates in two breeding seasons for a range of bird colonies across San Francisco Bay. They wanted to know if Forster’s terns’ nesting abundance could be correlated to their acoustic activity. Although the obvious answer might be “yes,” they tested their hypothesis with extensive ambient recording during the entire 2009 and 2010 nesting seasons to minimize variance. In addition to acoustic monitoring, they conducted nest monitoring to cross-check their results. What they found was encouraging: Tern acoustic activity was “strongly correlated with nesting abundance among colony sites (71% of variance explained).” They also found that sound correlated with “changes in nest abundance between years (88% of variance explained).”

The researchers note that automation of the acoustic monitoring is possible. However, the equipment is especially sensitive to detect the correct bird sounds while avoiding a glut of false positives. They note that the automated acoustic survey does “reduce a number of biases” that can be common in long-term monitoring programs, such as observer bias and temporal bias. Likewise, having recordings means that the data can be reanalyzed and interpreted should any further questions arise. Finally, the authors note that the cost of acoustic sensors is bound to go down, while traditional monitoring will continue to have similar costs, if not become more expensive.

For conservationists, the study shows one of the many innovative ways that we can gather data to help us in our work in protecting animals. If a combination of technological advancements and creative thinking can be a way forward for monitoring terns, who knows how it can help monitoring other animals.